During the reconstruction of the Arkhangelskaya pipe used LTK “Free Falcon” 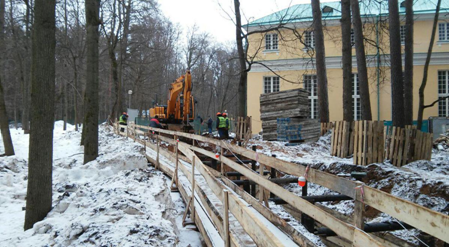 We have done extensive work on the construction of communication, without that no object can operate. The Museum “Arkhangelsk” is our jewel, and really want to get it pleasing to the eye — and parks and lawns and facades, and the Museum itself, and fountains that will score this year, — said Moscow region Governor Andrei Vorobyov.

Modernization of engineering infrastructure of the Museum-estate”the Russian Versal” in Moscow region, including relaying of water supply and drainage, performed with the use of tubular products of high-strength cast iron with nodular graphite (ductile iron) 100% domestic producers – LTK “Free Falcon.” Length of communications from company pipes on the territory of Arkhangelsk – 3.7 kilometers with diameters from 100 to 300 mm.

See also:  Became known, who is willing to fight for the seat of Putin

The work was seriously complicated by the fact that it is the object of cultural heritage. Individual projects, cultural, supervision. The requirements for all materials used in the reconstruction, was and is higher. Cast iron pipes throughout the world have established themselves as a strategic product used in the most responsible areas, such as the famous Palace and Park ensemble in France –Versailles, which just compare the work of domestic architects – estate “Arkhangelsk”.

Full modernization of engineering infrastructure of the Museum-estate, including the overhaul of the water intake site, and Sewerage pumping stations relaying networks warmly-water supply and drainage with a total length of 30.4 kilometers are financed from the budget of the Moscow region, work on the restoration of the former luxury will continue until 2025.

See also:  In the US the plane with the basketball players got during the flight a decent dent

The Director of the Museum-estate “Arkhangelsk” Vadim ZADOROZHNY thanked for their participation and support in the reconstruction of the object of cultural heritage of the peoples of our country.

“I want to repeatedly say thank you to everyone who cares, who’s next, who is helping to make Arkhangelsk the HOMESTEAD, which was, is and will be the territory of reference standards conforming to the best traditions of the private aristocratic collection…”, — said the Director.