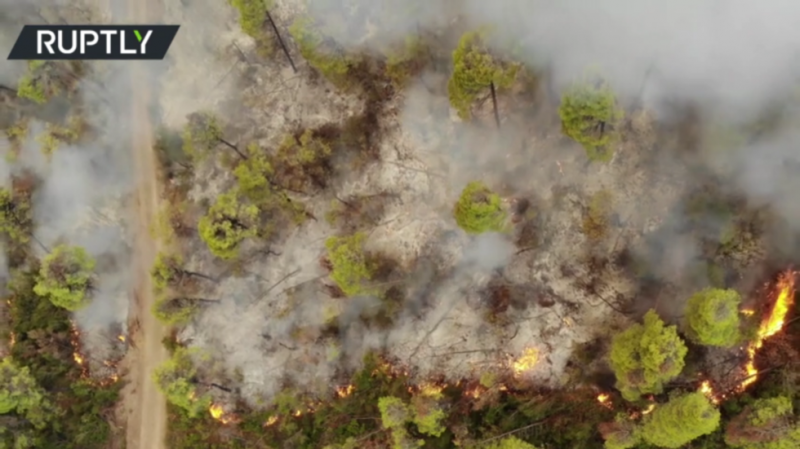 Dramatic drone footage of Evia from RT’s Ruptly video agency shows vast tracts of forest still engulfed in flames or burned to the ground. The blazes were so huge, they separated the two halves of the Aegean island, which has a population of 200,000.

Firefighters working throughout the night to save Istiaia, a town of some 7,000 in the north of Evia, and several nearby villages. They used bulldozers to open clear paths in the thick woods to act as a firebreak.

Six aircraft, four helicopters, 475 firefighters and 35 ground teams have been deployed on the island, according to Civil Protection Chief, Nikos Hardalias, with firefighters from Romania and Ukraine aiding their Greek counterparts. The military also sent 84 special forces troops to assist in tackling the blaze.

Some 1,400 people were taken off the island by boat on Friday, after the approaching wall of fire left them with no other means of escape. A flotilla of 10 vessels, including coastguard ships, ferries, and fishing boats, has now been assembled in case a second evacuation of residents is required, a coastguard spokeswoman told the AP news agency.

On the mainland, the wildfires, pushed by strong winds, have reached the suburbs of Athens, and a huge plume of black smoke hangs over the city. A special hotline has been set up in the city to offer advice to people suffering breathing problems.

The evacuation of residents was ordered in the nearby town of Thrakomakedones on Saturday, with video footage showing burnt homes and cars. Fires also raged on the southern Peloponnese peninsula, near Ancient Olympia, and in Fokida, in the center of the country.

Numerous wildfires took hold across Greece at the beginning of the week, as it endured its worst heatwave in decades, with temperatures reaching 45C (113F). The fires spurred large-scale evacuations, burnt forest land, and destroyed farms and homes. One volunteer firefighter died on Friday, and 20 people have required hospitalization.

Greek Prime Minister Kyriakos Mitsotakis said his country was experiencing a “nightmarish summer.” He said providing aid to those affected by the disaster was his “first political priority” and promised that the affected areas would be restored.

The situation with wildfires also remains difficult in neighboring Turkey. Its southwestern coastal regions were badly burned and eight people lost their lives.