Home / WORLD / Dozens of bodies, many of them buried Covid victims, are washed from banks of India’s Ganges by seasonal floods & float downriver

Dozens of bodies, many of them buried Covid victims, are washed from banks of India’s Ganges by seasonal floods & float downriver 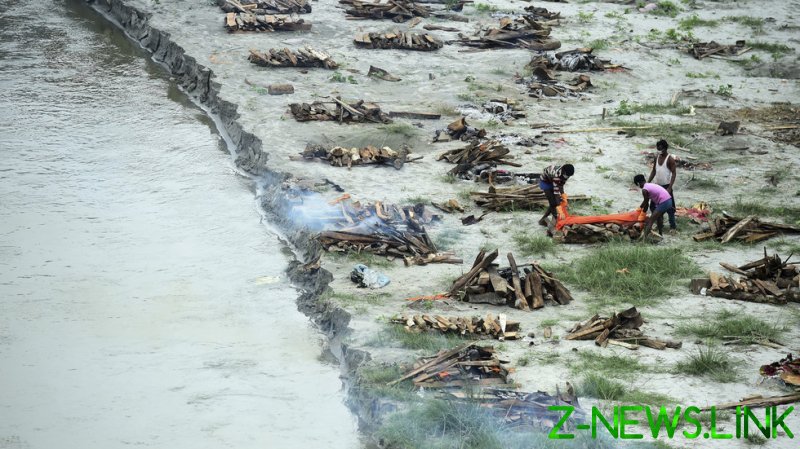 Grim footage from the last few days shows wrapped corpses surfacing in the waters and being carried down the Ganges, a river Hindus honor as holy.

Many of the bodies laid to rest on the banks of the river are reported to be from poor families, whose relatives could not afford enough firewood for a traditional cremation.

Neeraj Kumar Singh, a municipal official in the northern Uttar Pradesh city of Allahabad (Prayagraj), said nearly 150 bodies needed to be cremated in the past three weeks after being found in or near the river.

“The area is spread over a kilometer and our guess is there are around 500-600 bodies buried,” he was quoted by AFP as saying.

“Every precaution is taken in dealing with the bodies while performing their final rites,” he added.

The grim discoveries come after India became gripped by a devastating surge in Covid-19 infections between April and May, which caused some hospitals to run out of beds and oxygen supplies.

Some crematoriums in the country were forced to hold mass funeral pyres as the number of people dying from the virus increased.

More than 396,000 people have died from Covid-19 in India to date in the pandemic, according to the country’s official death toll.