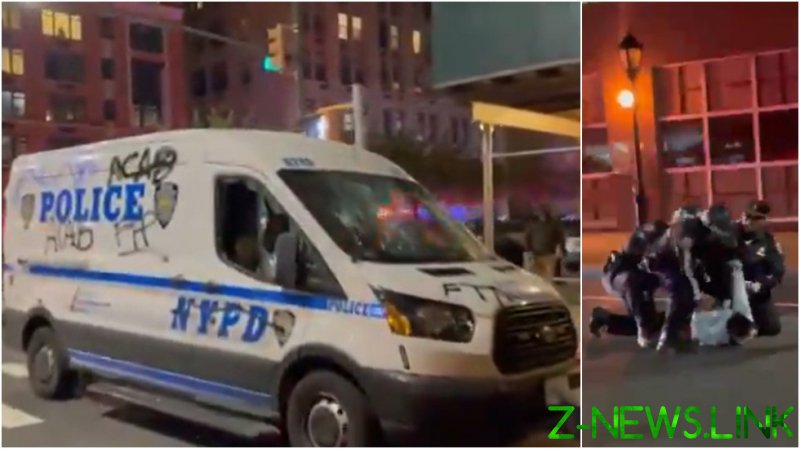 A number of law enforcement cars and vans were seen with their windows smashed out and scrawled with anti-police graffiti in footage that made the rounds online. The parked vehicles appear to have been vandalized after officers left the immediate area, as none could be seen in the videos.

Storefronts were also smashed up amid the unrest, with one clip showing shops with blown out windows as a hostile bystander confronts the man filming, shouting “walk the f**k on! You wanna play press? Let’s play f**kin’ press, b**ch.”

Nearly 30 were arrested following acts of vandalism against stores in Brooklyn’s Cobble Hill neighborhood, according to journalist Issa Khari, who documented the protests on the ground.

Because of the “protest activity” around downtown Brooklyn, the NYPD urged residents to find “alternate routes” of travel and to expect a “large presence of emergency personnel” in the area. The department has otherwise offered no other details on the ongoing unrest, including about arrests or injuries.

In other footage, police can be heard issuing orders to disperse over a loudspeaker, threatening demonstrators with arrest after declaring the gathering an unlawful assembly. Officers appeared to be moving in on the area, with protesters seen scattering in all directions.

As officers attempted to stop one vehicle near the protest area, presumably to question its driver, the car bolted, appearing to narrowly miss a line of police blocking off the road, though it’s unclear whether any were injured.

The chaotic demonstrations kicked off earlier on Tuesday evening, held in solidarity with activists in Philadelphia protesting the fatal police shooting of Walter Wallace Jr., a 27-year-old black man who reportedly suffered from mental illness. Wallace was shot multiple times during a confrontation with officers on Monday, during which he is said to have brandished a knife, setting off two nights of unrest in Philadelphia that have seen rioting, vandalism, looting and clashes with police.