Donald Trump Jr. explains why China’s ‘laughing’ at US military 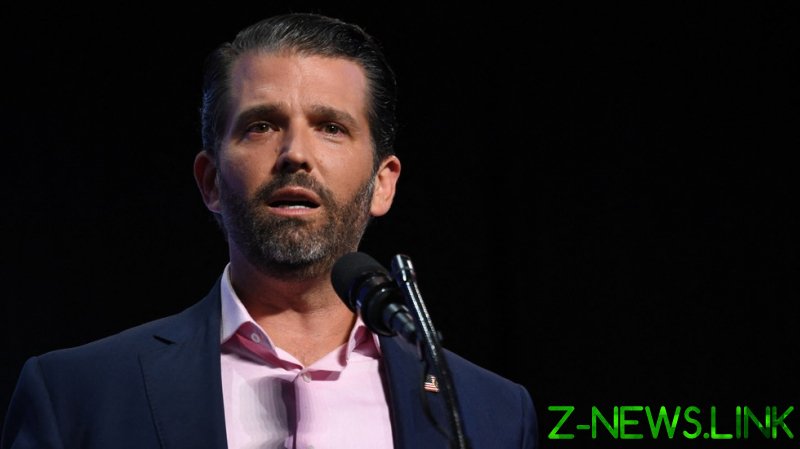 Speaking at the America Fest 2021 conference in Phoenix, Arizona on Sunday, Trump Jr. threw a rhetorical question out to the audience, enquiring what the attendees thought America’s “enemies” were doing, and quickly retorting: “They’re laughing!”

You think China is thinking, ‘We got to make sure we have plenty of trans pilots’?

The 43-year-old conservative was quick to add that he was “100% fine” with transgender airmen and women being appointed as long as they “were the best pilots.” However, he alleged that was not the “focus” of the air force, claiming the promotion of transgender pilots was “not about finding the best ones.”

Trump Jr.’s statement apparently referred to the new guidelines issued by the US Air Force in late April, which set out to ensure that “all service members and applicants for accession must be treated with dignity and respect, and afforded equal opportunity in an environment free from prohibited discrimination.” The updated guidelines mandate that no one can be “denied entry or continued service in the Air Force or Space Force because of their gender identity.”

The Air Force and Space Force blazed the trail in revising their policies following President Joe Biden’s decision to reverse a ban that had been imposed by his predecessor, Donald Trump, which had prohibited service members from seeking gender transition.

Under the new rules, a service member’s transition begins once they are diagnosed with gender dysphoria, which the American Psychiatric Association defines as “psychological distress resulting from an individual’s biological sex conflicting with their identity.”

The US Army has not only ceased to turn down transgender soldiers or deny them the right to be deployed, including overseas, but also took it upon itself to shell out for the hormone therapy, mental health care, and surgeries of service members with gender dysphoria, as outlined in a memo released in late July. Even so, critics insist there is still room for improvement in terms of diversity in the military, demanding it also provide assistance to non-binary and intersex service members who do not fit the male-female system currently employed by the army.

According to Trump Jr., the “pendulum has swung so far” in the US Army’s fight on discrimination, it has “overcorrected,” and the “mainstream left has lost their minds.”

Trump Jr.’s accompanied his Air Force comments with a swipe at the decision to let record-breaking American transgender swimmer Lia Thomas, who previously competed for men’s college teams, compete against female athletes. The controversial move has prompted the parents of members of the University of Pennsylvania women’s swim team to plead with the National Collegiate Athletic Association to change its rules. They claim “the integrity of women’s sports” is at stake.