Dolgopolov finished the fight in Tokyo 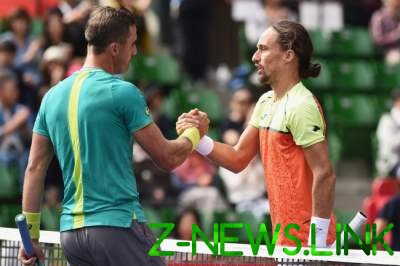 The first racket of Ukraine Oleksandr Dolgopolov failed to reach the quarterfinals of the tournament ATP 500 in Tokyo, with a prize Fund of $1,706,175.

In the second round of “Japan Open” Dolgopolov met with a 46-th racket of the world from the USA Steve Johnson. Ukrainian was considered the favorite in the match but was unable to impose your tennis.

In the first set Dolgopolov three times lost his serve at the reception, marked by a single break. In the second game, Johnson quickly made a break and bring the match to a victory point.

In the match against Dolgopolov Johnson has served 6 aces, made 1 double fault, won 71% of games with the first goal, converted 1 of 2 break points and played 2 of the 6 chances the opponent on the break.

For an exit in the second round of a major tournament in Tokyo Dolgopolov earned 45 rating points and almost 22 thousand dollars in prize money.

After a trip to the capital of Japan Alexander Dolgopolov returns to China, where he will perform at the Masters in Shanghai.