Distrust of authority is what really turns many into ‘anti-vaxxers’ 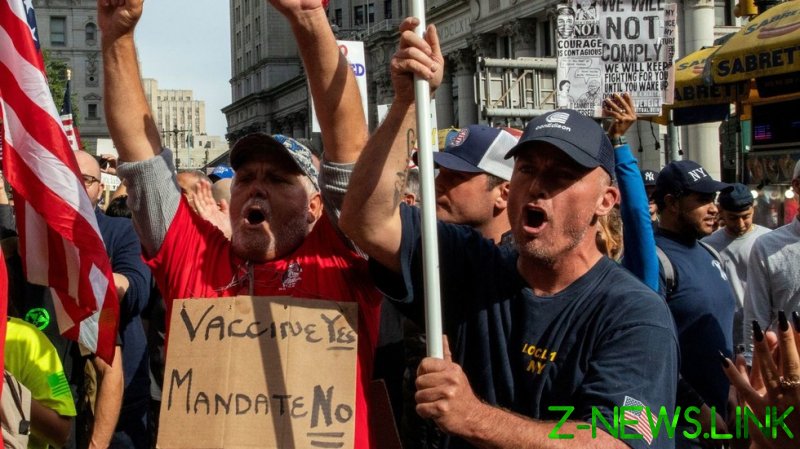 Fear is a powerful emotion that can cloud thinking, impair judgement and cause some people to regress to a state in which they passively do as they are told and seek protection from anyone who promises security or a ready-made solution for their angst.

Fear and propaganda astutely sown in the public’s collective consciousness can polarise and divide people and make us focus on our differences rather than what unites us.

A system which goes one step further and denounces a group of individuals as the cause of societal ills can all too easily manipulate the general population’s emotions and implement the tried and tested strategy of divide and conquer, and blame the ‘other’ with little resistance. We have seen this story repeated throughout history with numerous groups: Jews and Muslims, Roma and refugees, Christians and Communists amongst others being used as the scapegoats by the ruling class.

I recall the lyrics of the 1980s song ‘Train on Fire’ by Soviet rock band Aquarium, which tells of party elites profiting at the expense of common people during the days of the USSR.

We were taught that life is a fight

But new intelligence has just reported that

We fought ourselves all this time

Like many people over the past 18 months, I have been exposed to plenty of rhetoric about COVID – some sensible, some less so. I have encountered fanatics on all sides seeking to impose their ‘wisdom’. In relation to vaccinations, some warned me that I could die if I did get the vaccine; others warned me that I could die if I did not. Looking beyond the hype, I was aware that my personal risk was tiny in either case. In the end, I chose to get the jab primarily to protect my patients and those more vulnerable around me for whom Covid can indeed be a nasty or even fatal illness.

In my view, it is reasonable to ask sensible questions about vaccine side effects without automatically being demonised as an anti-vaxxer, just as it is a right to scrutinise how the UK government’s failures during the early days of the pandemic are considered to have led to thousands of needless deaths.

Other authorities, such as the Victorian state government in Australia, have used the pandemic to implement draconian laws that have seen one of the world’s longest lockdowns brutally enforced by police using teargas and stinger grenades; even the elderly were not safe from pepper-spraying.

US cities like New York have threatened that police, firefighters and other workers who refuse to be vaccinated by the end of the month will cease to be paid.

Greece and France have ordered all healthcare workers to be vaccinated, reportedly leading to 3,000 health workers in France being suspended without pay last month. Canada plans imminently to place all unvaccinated government workers on unpaid leave.

My personal view is that, overall, getting the vaccine incurs more benefits than risks. But I am troubled by the idea that those who refuse to get the jab risk being pushed into an unpaid and ostracised underclass that affects not just them but also their families. In some quarters, there has almost been a sense of satisfaction or schadenfreude when a so-called “anti-vaxxer” is reported to have died from Covid. Such attitudes only serve to alienate and thus harden views, not to mention the lack of compassion and understanding that leads to ‘celebrating’ the death of someone who, perhaps for their own personal reasons (rightly or wrongly), decided not to get jabbed.

It is dispiriting to hear that one in seven Americans have severed friendships with those refusing to get the jab, whilst a smaller proportion of those who refuse the jab have done the same. Celebrities and politicians appear to be fomenting unrest and promoting the idea of cancelling friendships and demonising those refusing to take Covid vaccines (or indeed those who have taken them) depending on what stance the celebrity takes.

I have not stopped being friends with anyone because of their views about vaccination or lockdown for the same reason I maintain friendships with people across most of the political spectrum regardless of whether or not I agree with them. In the days of cancel culture, when some individuals are too fragile to have their worldview and opinions broken down and remoulded into something stronger, I take the view that respectful debate helps us to learn from each other and even refines and strengthens our own positions.

Personally, I think for some people a reluctance to be vaccinated stems from a general distrust of authority, which over the years has arisen with some justification.

Governments across the world, as well as their rich backers and corporate and media auxiliaries, have deluded us into supporting wars and attacking the wrong targets whilst sowing confusion and disunity amongst the masses. Then they expected us to give them the benefit of the doubt when it came to Covid.

A broken clock still tells the time correctly twice a day but it is not functional. In the case of trust in governments, this, for many, eroded a long time ago. Distrust can manifest in unhealthy ways and lead to healthcare workers being harassed, though they are the ones saving lives – both before and during the pandemic – and will continue to do so.

To demonise those on the frontline means not only attacking a soft and inappropriate target (most of whom have had the vaccine and would have hardly done so if they believed it to be dangerous) but also lacks the courage or wisdom to challenge those in power who are mismanaging the crisis and setting the rules of the game. This sideshow serves as a distraction from how governments have mismanaged and exploited the pandemic, whilst leaving health services ill-equipped to deal with additional demand and endless waiting lists.