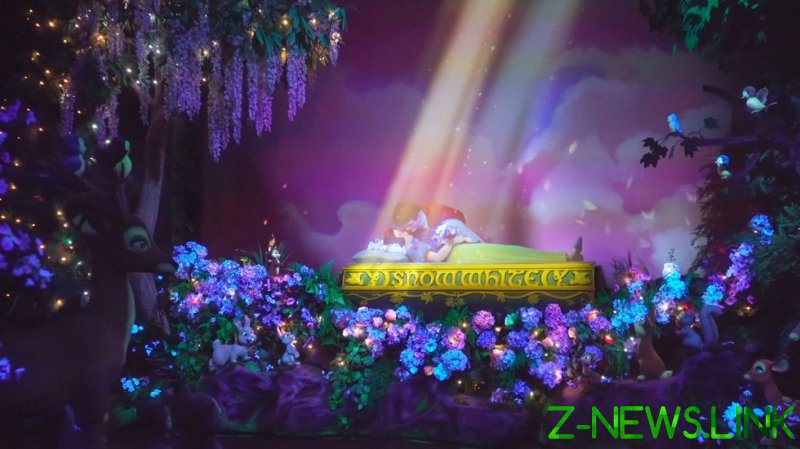 The famed attraction, a Disneyland staple since its 1955 debut, was revamped with major technical upgrades during the theme park’s closure due to the pandemic. However, its new grand finale has drawn criticism despite being more faithful to the 1937 animated movie.

In the scene, the Prince wakes Snow White with a kiss of ‘true love’ from the sleep-like trance she was put under by the Evil Queen.

“A kiss he gives to her without her consent, while she’s asleep, which cannot possibly be true love if only one person knows it’s happening,” noted a review on news website SFGate, which questioned why the park would add a scene with “such old fashioned ideas of what a man is allowed to do to a woman.”

“Haven’t we already agreed that consent in early Disney movies is a major issue? That teaching kids that kissing, when it hasn’t been established if both parties are willing to engage, is not OK?” added the reviewer, who also noted that the ride had a more “comprehensive storyline.”

While the ride – rebranded as ‘Snow White’s Enchanted Wish’ – “preserves much of the charm” of the original, the critics asked why the ending was not “in keeping with the spirit of the movie and Snow White’s place in the Disney canon.”

In its previous iteration, the ride focused more on the Evil Queen’s plot and was titled ‘Snow White’s Scary Adventures in Disneyland’. The updated ride reportedly takes a lighter approach to the fairy tale, and adds upgraded lighting systems, animatronics and a number of new scenes.

“The Snow White attraction has such a rich history,” Kim Irvine, creative executive for Disneyland Resort and Walt Disney Imagineering, said in a statement. “We wanted to… retell the story in a special way. We believe guests will enjoy this sweet storyline in a stunning experience.”

The majority of social media users echoed that sentiment – with many wondering if the ride was to be the next victim of ‘cancel culture’.

“Is this really a surprise to anyone? #Woke idiots are combing thru EVERYTHING for a #Gotcha moment,” a user tweeted.

One person said the critics were “twisting” the fairy tale to make it about “coercion.” While another user said Snow White “would have died” in the story without the kiss.

This was not the first time the kiss scene has drawn messaging concerns. In 2018, Kazue Muta, a professor at Osaka University in Japan, likened kissing a sleeping woman to sexual assault on an unconscious person.

“Problematic” aspects in other rides are being removed as well. Earlier this year, Disney confirmed that ‘Jungle Cruise’, also launched in 1955, will be modified to excise “negative depictions” of Native Americans that portray them as savages or subservient.

The company also said last June that its ‘Splash Mountain’ attraction was also being revamped – to remove references to black stereotypes found in the 1946 film ‘Song of the South’, on which it was based – in favor of the 2009 animated film ‘The Princess and the Frog’, which features a black female lead.

Disneyland reopened to California residents on Friday after a record 13-month closure.