Home / WORLD / ‘Disgusted’ Nikki Haley throws Trump under the bus, but conservatives & #Resistance are having none of her ‘flip-flop’

‘Disgusted’ Nikki Haley throws Trump under the bus, but conservatives & #Resistance are having none of her ‘flip-flop’ 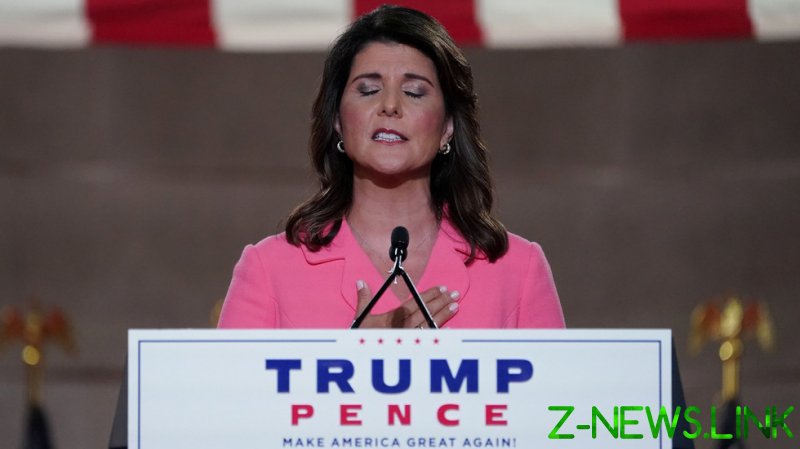 “We need to acknowledge he let us down,” Haley told Politico in an interview published Friday, making an effort to create palpable space between herself – an upwardly-mobile young politician apparently determined to run for president in 2024 – and the former commander-in-chief whose own party couldn’t wait to stick the knives in.

Haley has not spoken to Trump since before the January 6 raid on the Capitol, and appears to have blamed him for the entirety of those events. “When I tell you I’m angry, it’s an understatement,” she fumed, declaring she was offended on behalf of former VP Mike Pence. “I am so disappointed in the fact that [despite] the loyalty and friendship he had with Mike Pence, that he would do that to him. Like, I’m disgusted by it.”

Though she hadn’t spoken to Trump, the former South Carolina governor didn’t waste any opportunities to grandstand in the days following the clash at the Capitol, noting in a speech at the Republican National Convention that “it wasn’t just [Trump’s] words … His actions since Election Day will be judged harshly by history.”

Social media users were not impressed by Haley’s “flip-flop,” viewing it as a transparent attempt to position herself as electable.

Neither were fellow South Carolina politicians.

And if Haley was trying to appeal to the #Resistance, they wanted no part of her either.

Politico fawned that not only had Haley “hit the jackpot” in her service as UN ambassador but that she had “nailed the role of adult in the room,” coming out with a “political future” that was “brighter than ever before.” But while the outlet seemed certain Haley “is going to run for president in 2024,” it acknowledged it didn’t know “which Nikki Haley will be on the ballot,” implying that the many-faced politician would have to “choose between these characters.” It also admitted that the former South Carolina governor’s critics saw in her “an absence of core beliefs and a lack of tactical thinking.”

Haley’s principles have always been flexible at best, however. After stepping down as Trump’s ambassador to the UN, she wasted little time before joining the board of directors of military contractor Boeing while setting up a think tank addressing “international dangers.” While she stepped down from Boeing’s board last March over the company’s efforts to secure a federal Covid-19 bailout, Haley recently began collecting cash to support “principled conservative candidates” ready to join her in the “mission” of “defending our American values” under the aegis of a political action committee with the same name as her think tank.