‘Did they shake Biden’s stairs too?’ Russians say LMAO after Salisbury poisoning suspects linked to explosion at Czech ammo depot 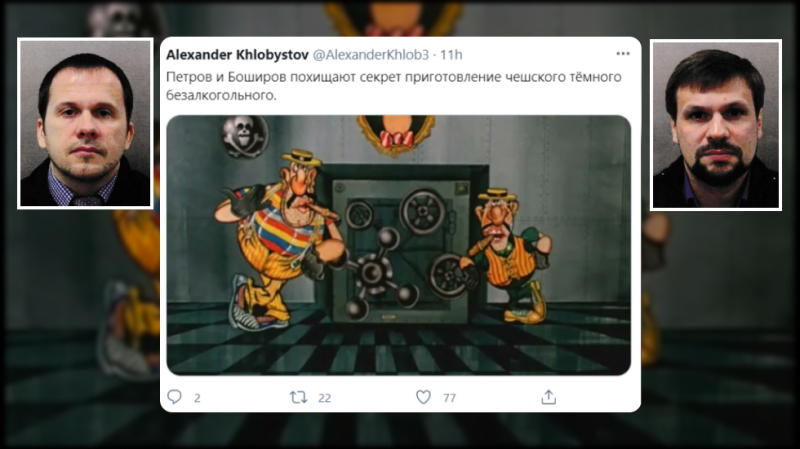 A diplomatic scandal rocked Russian-Czech relations this weekend just before a scheduled visit to Moscow by Czech Foreign Minister Jan Hamacek. Prague expelled 18 Russian diplomats and accused Moscow of sending intelligence agents to blow up a munitions depot a few years ago.

The news would have been received with much less amusement in Russia, were it not for the alleged identity of the suspected saboteurs. While the Czech police did not directly mention the 2014 explosion, they named the region where it took place – and pointed the finger at the same people, who already stand accused by Britain of going after Russian double agent Sergei Skripal, who was poisoned in Salisbury in 2018. Best known as Alexander Petrov and Ruslan Boshirov, they are said to be agents of the Russian military intelligence agency, the GRU.

The timing of the revelation and the highly publicized identities of the accused left many people in Russia with little doubt that it was simply a PR stunt aimed against Moscow. They responded with jokes and memes.

“Here is Petrov and Boshirov cooking ‘Novichok’ poison in Prague. Footage by the Czech intelligence,” one jester said, posting a fragment of a cult Czech children’s animation produced in the late 1960s.

Another one posted ‘photo evidence’ showing the duo blowing up the depot. It comes from another Soviet kids’ favorite, Poland’s ‘Bolek and Lolek’ toons.

Yet another post ‘showed’ Petrov and Boshirov taking orders from Vladimir Putin himself. This one was a tongue-in-cheek joke, considering what animation it refers to. It is about a school student who wants to be a freerider making others do his chores, but gets burned again and again, including by the two hapless ‘helpers’ who follow his every instruction in the worst possible way.

Other commenters focused on which other crimes Petrov and Boshirov can be accused of committing next. Could it be that the Suez-blocking incident was actually Putin playing five-dimensional chess?

How about the assassination of JFK, the attack on Pearl Harbor and Joe Biden’s resent struggle with accending a stair to Air Force One? Could it be that the same ‘Russian agents’ posed as Karl Marx and Friedrich Engels to pen the Communist Manifesto? Were the actual last words of Julius Caesar’s “Et tu Bashirov?” And where were these two people when the Covid-19 outbreak started in China?

One commenter summed up the reaction: “The message ‘Petrov and Boshirov were here’ is being discovered by comedians in an increasing number of NATO Allies.”