Home / WORLD / DHS head admits 12,000 ‘or more’ Haitian migrants from Del Rio released BACK into the US

DHS head admits 12,000 ‘or more’ Haitian migrants from Del Rio released BACK into the US 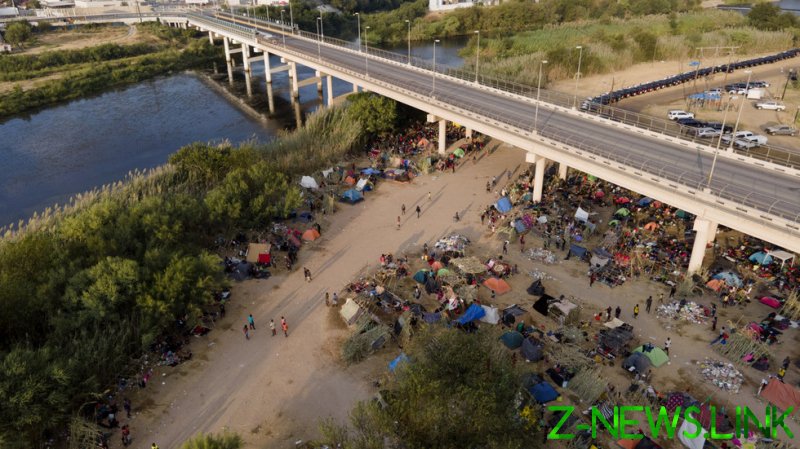 Appearing on ‘Fox News Sunday’, Mayorkas was asked by host Chris Wallace how many of the thousands of migrants who had been photographed waiting to be processed at the bridge had been released.

“I think it’s about 10,000 or so… 12,000,” Mayorkas said. Around 3,000 others have been detained, but the immigration official admitted the number released into the US could increase as their cases were reviewed.

Increased migrant numbers and controversial catch-and-release programs have already earned President Joe Biden plenty of pushback for his handling of the US-Mexico border. However, tensions increased when migrants set up an encampment under the Del Rio bridge, with Texas officials blasting the Biden administration for not controlling the situation.

The release of migrants into the US has also come under scrutiny, with officials admitting earlier in the week that many of those processed at the bridge had not been tested for Covid-19. Nonetheless, questioned by Wallace on Sunday, Mayorkas claimed officials follow “strict Covid testing protocols.”

“We test, isolate, and quarantine unaccompanied children. We work with nonprofit organizations to test families,” he said, though he could not say how many of the recently processed migrants had been tested.

However, speaking at a White House press briefing earlier in the week, Mayorkas said, “We did not test that population of individuals.” He added that he therefore did not know whether some of the released might be sick with Covid.

Migrants who are released by border patrol officials are given an order to appear in the immigration court, but Mayorkas admitted the chance of most appearing was likely to be low. Around 44% of the recently released group are expected not to appear, based on previous Department of Justice data.

Mayorkas’ interview stirred outrage among Republicans on social media, many of whom took what he said to be an admission of defeat in the immigration crisis and proof that he should step down.

Conservatives also targeted the lack of testing among those released and contrasted that with the recent vaccine mandates imposed on Americans by the president.

Roughly 30,000 Haitian migrants have crossed into Del Rio since September 9. Though Mayorkas admitted the immigration system needed “reform,” he made it clear, when asked why they were not “stopped,” that he did not agree with the building of a border wall.

“The law provides that individuals can make a claim for humanitarian relief. That is actually one of our proudest traditions,” he said.