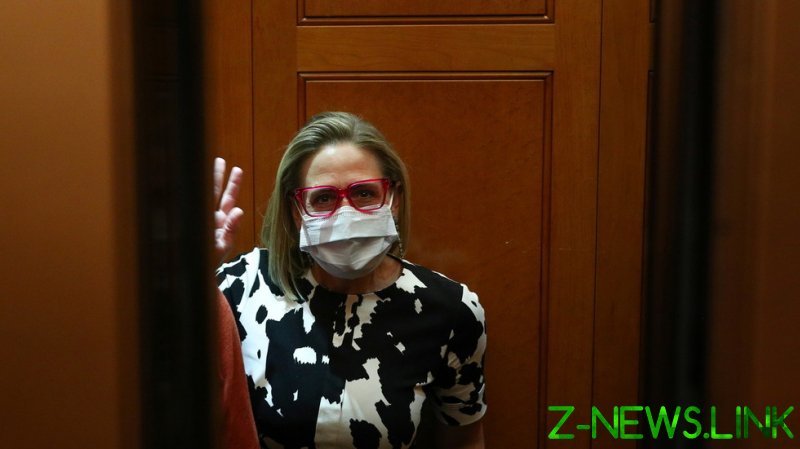 A woman named Karina approached Sinema on board the flight from Arizona to DC on Monday, and demanded the senator’s commitment to amnesty for illegal immigrants. She was filmed by someone from the Arizona Dream Act Coalition (ADAC), a group advocating for granting citizenship to people brought into the US illegally as children.

Upon landing at the Ronald Reagan Washington National Airport on Monday evening, Sinema was greeted by another group of protesters, shouting questions about the “human infrastructure package,” the $3.5 trillion spending bill proposed by the Democrats.

Sinema ignored both stunts. She and her colleague Joe Manchin (D-West Virginia) have both come under pressure from Democrat activist groups after refusing to go along with the spending bill, dubbed ‘Build Back Better.’ Democrats have hoped to pass it in the Senate without any Republican votes, using a procedure called reconciliation, but they need at least 50 votes for that – and without Sinema and Manchin, they have only 48.

Biden complained about that very fact earlier in the day. Asked to address Sunday’s incident when a group of activists followed Sinema into a bathroom at Arizona State University, Biden said he didn’t think such tactics were appropriate, but that “it happens to everybody,” unless they have Secret Service protection.

“It’s part of the process,” he added.

In a statement made public before Biden’s remarks, Sinema herself condemned the activists’ behavior as “unacceptable,” illegal and “wholly inappropriate.”

Living United for Change in Arizona (LUCHA), the group behind the bathroom stunt, is not just any fringe organization. Its biggest donor is George Soros’s Open Society Foundation, but it received donations from the National Education Association teachers’ union as well as Facebook CEO Mark Zuckerberg’s group FWD.us. LUCHA also received at least $12,500 back in August from Bold PAC, a fundraising arm of the Congressional Hispanic Caucus.

The tactics used by LUCHA and ACAD mirror the brigading of senators during the 2018 confirmation process for US Supreme Court Justice Brett Kavanaugh. One of the Republican senators, Jeff Flake, was famously cornered in a Senate elevator by activists that later turned out to be from Center for Popular Democracy (CPD), another major recipient of Open Society Foundations cash.

Democrat activists also occupied Senate office buildings on several occasions and picketed several other senators whose votes they hoped to flip, denying Kavanaugh the confirmation. Their pressuring of Flake apparently backfired, however, as he ended up voting yes.