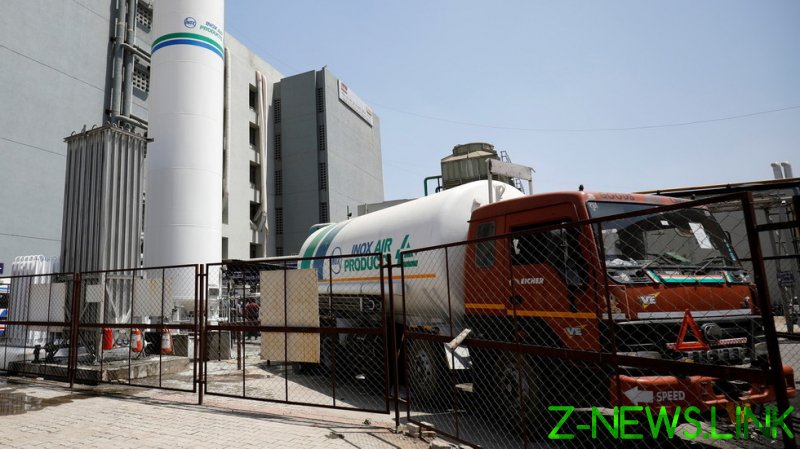 Early on Wednesday morning, an oxygen tanker arrived at Delhi’s GTB Hospital, where over 500 patients require the medical gas as part of their treatment. The delivery came less than an hour before the facility was expected to run out of what was left of its stockpile.

“All of us had almost lost hope. We were racing against time,” a resident doctor told India Today, on condition of anonymity.

The shortage happened amid a spike in Covid-19 infections in the city of 20 million people. On Tuesday, Delhi recorded 28,395 new cases, the highest increase since the pandemic began. There are over 85,000 active Covid-19 cases.

A similar sharp rise in Covid-19 cases and consequent scramble to secure supplies of oxygen have been reported in other Indian states, including Maharashtra, Madhya Pradesh, and Uttar Pradesh. The central government initially responded to the crisis by telling states to “keep demand [for oxygen] under control” and stop wastage.

“Demand-side management is as important as supply-side management. Containing Covid spread is the responsibility of state governments & they should fulfil this responsibility,” Piyush Goyal, the minister of consumer affairs, food and public distribution said on Sunday.

As the crisis continued, Prime Minister Narendra Modi made a televised address on Tuesday evening, saying his cabinet, the state governments, and the private sector were working together to solve it. He suggested states could impose lockdowns to curb the infection as the last option.

Demand for oxygen supply rose globally last year due to the pandemic, and India was one of the countries that rushed to meet it. Between April 2020 and January 2021 it exported over 9,000 metric tons across the world, earning almost $1.2 million. The sum is almost twice more than what oxygen export was worth to India during the entire 2019-2020 financial year, according to the Department of Commerce data.

The ongoing crisis arose due to distribution bottlenecks rather than lack of production capacities or stockpile. To alleviate it, the country is diverting deliveries from industries like steelmaking, trying to set up safe transportation through railways and taking other measures.