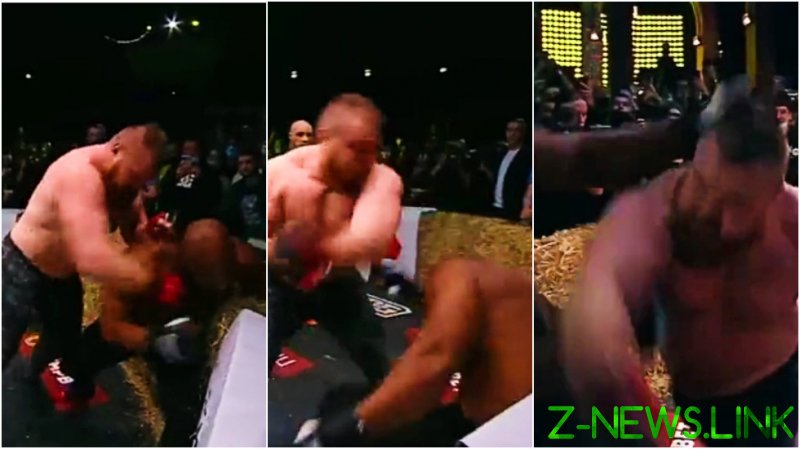 Fearsome powerhouse Vyacheslav Datsik, who was once part of a banned nationalist party and has spent years in jail for a litany of offenses, appeared to face a tough test in the form of Randy Randayn, a confident challenger with a five-fight perfect record in the discipline.

Known as Kofi King, financial adviser Randayn, from the south-west town of Bournemouth in the UK, claimed he had knocked out the world pit-fighting champion on his way to a meeting with the man who spent five years in prison for shop robberies, serving his time alongside two neo-Nazis he reportedly boxed naked when he fled to Norway in search of asylum from Russia.

Despite clearly clutching his head in pain, Randayn bravely gathered himself after being smashed in the face several times with 90 seconds of the opening round remaining against free-hitting Datsik.

Leaning against the hay blocks making up the ring, Randayn carried on against a backdrop of a baying crowd, only to be swiftly hammered again by at least two huge shots.

The referee stepped in and Randayn appeared to sway around part of the ring before a towel – possibly thrown by his corner – was picked up by the official in the center of the circle.

Datsik was said to have been around 33lbs heavier than his outclassed rival, who is thought to have weighed more than 251lbs.

According to Ren TV, which televised the brutal bout as part of a Top Dog FC card, Datsik set a savage pace from the start and never relented.

The visiting fighter had warned: “I’ve beaten everyone there is to beat in England. I can’t find anyone else who wants to take me on, so I’ve had to travel all the way to Russia.

“I can box, I can chop, I can do anything. Datsik thinks that MMA gloves will save him, but no.

“I will knock him out; because of the gloves I will not worry about breaking my hands. There will be blood – I’ll just knock him out.”

Victorious Datsik was declared insane by a court and placed in a psychiatric hospital in St. Petersburg a decade ago and has since served time for attacking an underground brothel.

The 40-year-old’s latest fight took place in a space with a diameter of a maximum of six meters.

Datsik was backed by his devoted wife and representative, Viktoriia, who recently gave birth to his daughter.