Home / WORLD / Covid zealots are infiltrating every aspect of our lives; I just quit my swim team due to harassment over my jab status

Covid zealots are infiltrating every aspect of our lives; I just quit my swim team due to harassment over my jab status 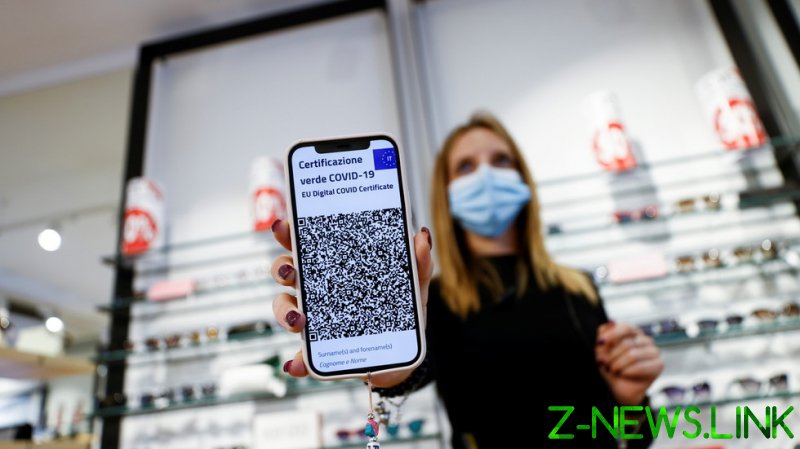 It seems like just yesterday that I was  ordered back on a plane in my native Canada by federal authorities after arriving home to Vancouver from my professional base in Paris – all because I wasn’t double-jabbed, and refused to enter a government-mandated Covid quarantine facility at my own expense, despite testing negative and showing proof of acquired immunity with Covid-19 post-recovery antibodies.

But now, just over two months later, I have landed in another row over Covid zealotry – this time with board members of my French swim team, an activity I took up again many years after competing at the national level, and which is now critical to relieving me from back pain. The episode serves as an example of the kind of bullying to which even those who are in full compliance with increasingly unreasonable government measures are being subjected.

The first sign of potential trouble came last month when our masters-level competitive swim club’s board of directors sent out a group email asking for everyone to email their health pass. I responded by asking how to even do that, when some people opt for regular nose swab tests to validate their health pass (which enables them to access everyday venues in France like swimming pools for group activities such as a swim club). My query was ignored. I quickly realized that they considered the health pass to be synonymous with proof of being jabbed, which is the only static form of the pass.

But this week, another board member contacted me personally to request an emailed copy of my health pass documentation. I pointed out that health passes aren’t necessarily static, since some people generate a new one every three days with nasal testing (which, as of this week, becomes an out-of-pocket cost here in France) – notably those who are unvaccinated.

In that case, my interlocutor responded, it would be necessary to email him a new health pass document every three days. I declined, offering instead to simply scan my QR code at the pool’s entrance along with the rest of the public. He then informed me that doing so is no longer an option, despite the fact that there is indeed a designated person whose task is to scan the passes of anyone entering the pool.

There’s a significant difference between scanning the QR code produced from uploading your jab or test result into your digital wallet, versus emailing a copy of the documents that produced it to someone. The former displays only your name on your smartphone app along with the QR code, while the latter reveals whether you’re jabbed or just tested.

It’s not difficult to see how collecting hard copies of these documents could open the door to potential further social discrimination or marginalization of the unjabbed, despite the fact that the jabbed are more likely to carry and transmit the virus than someone who validated their health pass via negative test.

The government designed the QR code verification application specifically to prevent any collection of private or medical information. The person scanning the code can’t tell whether you’ve been vaccinated or whether your QR code is derived from a negative test, in lieu of vaccination.

Any user of the verification app who tries to even take a screen capture of someone’s QR scan results – which reveal only the name and birthdate of that person along with a valid/invalid pass status – sees a pop-up window warning of potential criminal penalties of capturing that basic information.

So, under no circumstances is anyone supposed to be asking to collect hard copies of people’s health pass-related documentation, which contains much more private medical information than a simple QR code scan.

Even having one’s app-generated QR code outside of one’s possession can be problematic. No one knows this more than French President Emmanuel Macron, whose own health pass ended up in the wild and online, and was subsequently used by a 19-year-old man lacking the necessary QR code to enter a hospital in Marseille for a medical consultation.

And while the president could cut through red tape to get a new code when his was invalidated for misuse, the rest of us risk landing in Byzantine French bureaucratic hell if the same were to ever happen to us.

Apparently, those of us who know our rights are few and far between. Unlike the sheep who unquestioningly abide by arbitrary rules set by overzealous citizens in this era of sanitary psychosis, I said that unless I can just scan my QR code at the door like anyone else entering the pool, I’d like to request a transfer of my license to another swim club.

At this point, another board member enters the chat and calls my response “radical.” No, sorry, but ‘radical’ is unilaterally demanding access to hard copies revealing the jab status of each member of your sports team. ‘Radical’ is demanding that anyone unjabbed email their nose swab test result to you every three days. ‘Radical’ is doing all this despite it being contrary to the already extreme social control measures imposed by government to make life so complex for those with proven acquired immunity that they throw up their arms and get a shot of something they don’t want or need.

Fortunately, there are other swim teams who restrict the sanitary harassment of their members to the bare minimum currently required by law. But there’s a larger issue at play here, and one which I’m certain I’m not the only one to have experienced.

How many other people have encountered in their daily lives examples of zealots going above and beyond what the law requires to browbeat their fellow citizens in this era of sanitary authoritarianism? It’s one thing to argue their illegality in doing so and to threaten legal challenges, but this is easier said than done when administrative judges often tend to err in favor of positions staked out by the authorities.

Those same positions have now also been assumed by the vast majority of the public, if only to avoid cognitive dissonance associated with having acquiesced to a jab that they may not otherwise have accepted in order to live a hassle-free life.

People are now fully complicit in the systemic violation of their own privacy by both government and by their fellow citizens, because they truly believe that it’s in the collective interest and that anyone speaking up or resisting is the problem. They’re just happy to be here and not locked inside anymore. And it’s through successful manipulation of public opinion through lies, fear, and relentless propaganda that truly free people come to no longer recognize their own society.