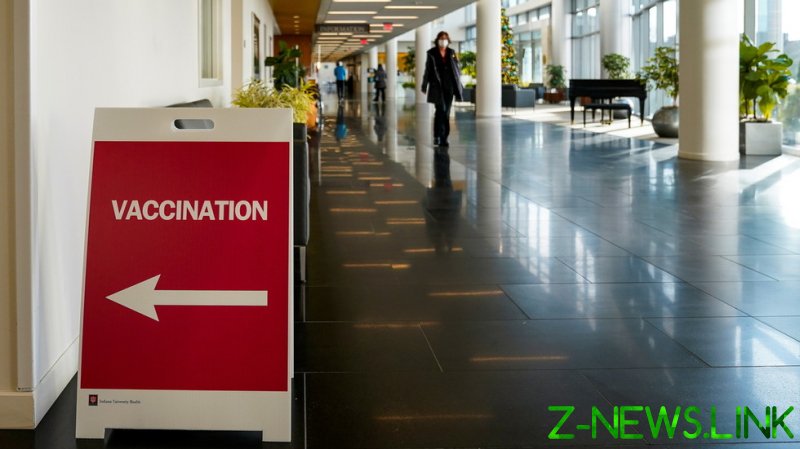 Eight students at the state’s largest university sought to block the requirement that everyone returning to campus in August must be fully vaccinated, including staff. US District Judge Damon Leichty denied their motion late on Sunday.

Vaccine mandates have been upheld by US courts, Leichty wrote in his 100-page opinion, adding that the university is pursuing “a reasonable and due process of vaccination in the legitimate interest of public health for its students, faculty, and staff.”

The decision was hailed by most corporate media outlets, who pointed out it was the first such ruling in the US – and that Leichty was nominated by former US President Donald Trump and confirmed by the Senate in 2019.

Others were more critical. Civil rights lawyer Robert Barnes called it a “terrible” ruling that will be contested on appeal, and argued it “basically tries to restore the 19th century case law where governments could force vaccine, force sterilizations, and force populations into detention camps in the name of ‘safety’.”

The university currently requires all students, faculty and staff to be fully vaccinated by August 1. Students who do not comply will have their class registration canceled, access cards and computer access “terminated” and not be allowed to participate in any campus activity, while faculty and staff who refuse “will no longer be able to be employed” by IU, as “working remotely and not meeting the [Covid-19] vaccine requirement is not an option.”

The eight plaintiffs argued this violated their rights to bodily integrity, informed choice of medical treatment and religious freedom, forcing them to choose between vaccination and education.

For certain students “this may prove a difficult choice, but a choice nonetheless,” Leichty wrote, rejecting their argument. They can get the vaccine, apply for exemption or deferral, transfer to a different school or drop out for the semester, he added, noting that “this hard choice doesn’t amount to coercion.”

Leichty further argued that students had already complied with IU’s mitigation strategies “without harm” during last year’s closures, and since the same measures would now be in effect for those few granted an exemption, they could not show “irreparable harm” to warrant an injunction.

IU is able to demand vaccinations since Governor Eric Holcomb has not followed in the footsteps of fellow Republican Governor Doug Ducey in Arizona, who last month banned public universities in his state from doing so.

Ducey’s decision came on the heels of a ruling by another federal judge allowing the Houston Methodist hospital system to mandate vaccinations, as a private employer. Judge Lynn Hughes of the Southern District of Texas told over 100 healthcare workers who objected that they could “freely choose to accept or refuse a Covid-19 vaccine,” but if their choice goes against the mandate of their employer, they “simply need to work somewhere else.”