Home / WORLD / Covid-19 reverse psychology: Did Johnson play the left by ‘pretending’ he didn’t want a lockdown so it could get public support? 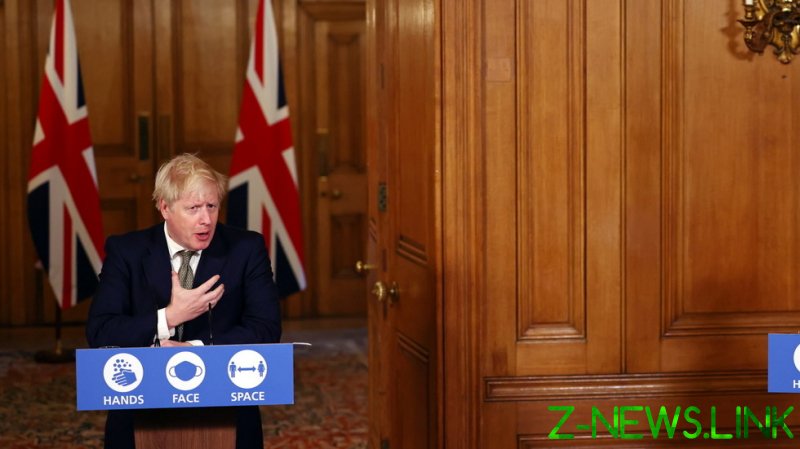 The phrase ‘smoking gun’ is oft-overused, but it is surely appropriate in relation to the report in the Daily Telegraph newspaper that the UK government struck a deal worth £119m with an American advertising company, OMD Group, urging people to ‘Stay Home, Stay Safe’ a full three weeks before Boris Johnson ordered a lockdown.

Think about what this means. It’s safe to assume that if this big money deal was struck on 2nd March, the preparations began a lot earlier – in February, or more likely, even earlier than that. You don’t just set up an advertising campaign with a major US agency in a couple of hours.

What does this tell us? Well, basically everything we thought we knew about how Britain came to be locked down on 23rd March is probably false.

But if they had already arranged a £119m lockdown advertising campaign, which referenced emergency economic measures in its communication strategy, it would mean the decision to lockdown had already been taken many weeks earlier. At the same time, the government was giving every impression that they weren’t going to lockdown.

Why did they do this? Well, put yourself in the shoes of Johnson and his top aide Dominic Cummings. If a Conservative government, and one which has already been denounced as by the liberal-left for being pro-Brexit, and anti-free movement, had said openly in February that they were planning to lock Britain down there would have been an outcry. The big question for the government was: how can we lock the country down, without stirring the liberal-left still further and provoking mass public opposition. What if the answer then was: pretend that we don’t want a lockdown? Then the binary, groupthink ‘culture warriors’ would be sure to press for one! They would end up calling for the government to do exactly what the government had planned to do all along! High-fives all round at Number 10.

Think back to March.

Reporting on the seemingly muddled UK response to the virus then made a lot of people think that the intention was to let the virus “pass through” the community. Was this intentional?

There’s grounds for believing it was.

A much publicised report in the Sunday Times said that Dom Cummings, a hated figure for hard-core Remainers, had argued against strict measures at a private meeting at the end of February. No 10 denied the claim, calling it a fabrication.

But the report made an impact. If ‘Deadly Dom’ wants herd immunity then surely we need to do the opposite and lockdown, was the Pavlovian response of many on the left.

Then there was the reporting, or rather misreporting of Premier Johnson’s “take it on the chin”television interview of 5th March. Johnson said that one of the theories (he didn’t mention herd immunity by name) of dealing with the virus was “that perhaps you could take it on the chin, take it all in one go and allow the disease, as it were, to move through the population, without taking as many draconian measures.”

That was like a red rag to a bull to those who were already convinced the government’s ‘response’ was too laid-back. But it is interesting to note that the Prime Minister wasn’t advocating ‘taking it on the chin’ – simply saying it was one theory that had been put forward. He actually said a few seconds later: “I think it would be better if we take all the measures that we can now to stop the peak of the disease being as difficult for the NHS as it might be”.

Johnson was actually hinting about more restrictions to come, but all the liberal-left could hear was the opposite.

By getting his opponents to push for a lockdown, by making them believe he opposed one, Johnson guaranteed that when a lockdown was finally announced, there’d be a much wider acceptance of it. Throughout the year the pattern has continued. The great enablers of the government’s Covid authoritarianism have been those on the left, for instance Richard Burgon MP, whose line of attack has not been to oppose Tory restrictions but to say that the restrictions either don’t go far enough or were being eased too soon.

The very same people who had been calling Johnson an ‘extremist’, even a ‘fascist’ before March, have ended up being his witting (or unwitting) accomplices. It’s hard to escape the conclusion that the government has played its opponents like a violin. Now here’s a thought.

Suppose that instead of being a ’clown’ and a ’buffoon’ Boris de Pfeffel Johnson was actually far smarter than anyone gives him credit for? We’ve all read mystery stories when the bar room idiot, who plays at being drunk, is actually the very sober criminal mastermind. Could the ‘clown’ actually be playing the clown in order to get the opposition to pressurise him to do the things he wants to do anyway?

And what about Dom Cummings? Love him or loathe him, he ain’t dumb. He’s a student of Russian history. He is said to quote Lenin. And if he admires Vladimir Ilyich, he could be an admirer of Felix Dzerzhinsky too. And how did ‘Iron Felix’ keep the show on the road after 1917? He set up the ‘Trust‘. The Bolshevik Counter Espionage operation which controlled, and misdirected, the anti-Bolshevik ‘White Russian’ opposition.

The opposition ended up calling for things that the government wanted them to call for. Rather like Labour going into the last election pledging for a ‘2nd referendum’ on Europe, or pushing for a lockdown in 2020. By supporting a lockdown, while giving the impression they opposed one, were Johnson and his government playing chess, when everyone else, who thought they were being so clever, was playing checkers?

The OMD deal is our strongest clue yet that the ‘reluctant lockdowners’ had it planned for quite some time.