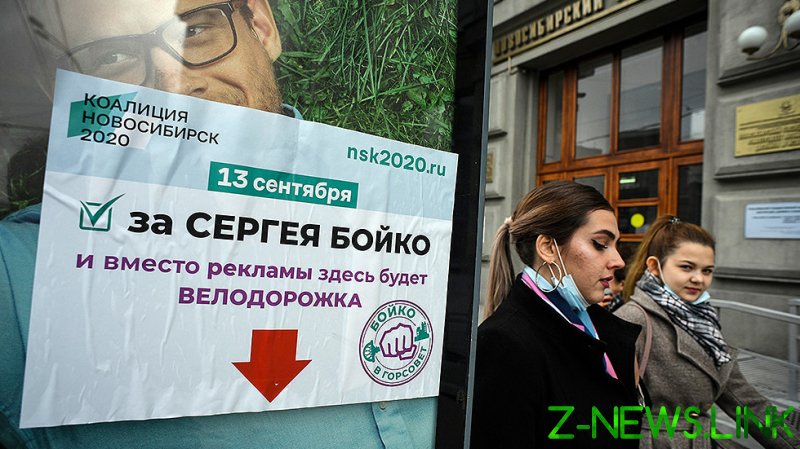 Over the weekend, some 35 million Russians will have the opportunity to vote in local elections in about a third of the country’s regions. Electors will vote for 22 city councils, 18 regional governors, and 11 regional parliaments. Pundits are watching carefully to see if the results provide any indications of a shift in the popular mood.

This year, online voting is permitted and the contests are spread out over three days. Officially, the reason is to avoid overcrowding in polling stations in the midst of the Covid pandemic, but some see the changes as a means of giving the government more opportunities to commit electoral fraud. This reflects a common perception that Russian elections hold little meaning due to widespread manipulation by the authorities.

That said, commentators sometimes display a rather schizophrenic attitude towards this issue. On the one hand they dismiss Russian elections as meaningless; but on the other hand they leap avidly on any results which suggest that the ruling party, the pro-Putin United Russia, is losing its grip on power. And so it is that some analysts are salivating at the prospect of things going badly for United Russia over the weekend.

Indeed, there are some reasons to believe that everything will not go United Russia’s way. According to the latest survey by the Levada Center, a polling company which received Western funding in the past, the party has only 31 percent support at national level. Russia is suffering economic difficulties as a result of the pandemic, and there are a number of local issues which have caused voters to turn against their rulers.

Consequently, the regional elections are being hotly contested, and in some places it is possible that United Russia candidates will be defeated or at least forced to submit to a second round of voting (which occurs in gubernatorial elections if no candidate wins 50 percent in the first round). In particular, the ruling party is facing a strong challenge in the votes for governor in Irkutsk and Arkhangelsk, and in the regional parliamentary and city council elections in Komi, Novosibirsk and Magadan.

Nevertheless, one should be cautious about drawing too much from this as far as national Russian politics are concerned. United Russia’s current rating is identical to the 31 percent level of support it enjoyed in a Levada poll in August 2016 (the year of the last national elections, in which United Russia won 54 percent of the vote), and higher than its 28 percent ratings in 2018 and 2019.

Bear in mind that these figures include many who do not intend to vote. United Russia’s support among those who say that they will actually cast a ballot is rather higher – 45 percent – and well above its nearest competitor, the ultra-nationalist LDPR, which rates at 16 percent. According to Levada, more Russians now approve of the national government than disapprove, after several years of the opposite, and most Russians think that the country is moving in the right direction. Given all this, United Russia’s dominance is not under immediate threat.

Moreover, many of the issues driving voters to turn against United Russia in this week’s elections are decidedly local. In Irkutsk, for instance, discontent derives from the authorities’ response to flooding and the resignation of the previous Communist Party governor. In Arkhangelsk, the issue is a landfill project which would see millions of tons of garbage arrive in the province from Moscow. In Komi, it is the region’s merger with the Nenets Autonomous District. And so on. Few of these issues have national ramifications.

Perhaps the only place where the so-called ‘non-systemic’ opposition is considered to have genuine prospects of success is in the city of Novosibirsk, the country’s third largest, where a coalition of anti-Communist and anti-United Russia candidates is being coordinated by one of Alexey Navalny’s team, Sergei Boyko. In 2019, Navalny introduced a ‘smart voting’ scheme which identified the candidates most likely to defeat United Russia in the Moscow city elections. This was credited with having some success. The plan is now being repeated.

However, it is noticeable that in the case of Moscow, pro-government candidates still won a majority in the city elections, despite both ‘smart voting’ and the fact that Moscow is probably the most liberal city in the country. Moreover, the main party to profit from the smart voting project turned out not to be the liberals but the Communists.

This suggests that the central beneficiaries of local discontent are unlikely to be liberal opposition groups, but rather the ‘systemic’ opposition parties, the LDPR, the Communists, and Fair Russia. In Irkutsk, for instance, the Communist candidate Mikhail Shchapov is likely to get enough votes to force a second round of voting. And in Arkhangelsk and Yaroslavl (where there is a by-election for the State Duma), it is the candidates of Fair Russia who are reckoned to have the best chances of defeating United Russia.

It is quite possible that United Russia will lose a few of this week’s local elections. It will, however, win most of them. Where it does lose, it will be systemic opposition which will reap the benefits. None of this suggests that the political system at the national level is under serious threat. It does, however, indicate that, despite their many imperfections, Russian elections, and the systemic opposition, do matter, and that Russia, at least at the local level, is gaining valuable experience in what one might call ‘normal’ democratic politics.