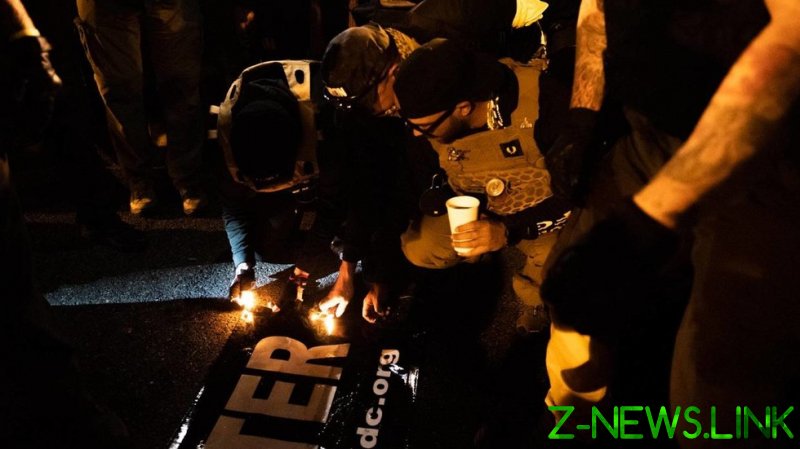 The chairman of the controversial group, Enrique Tarrio, admitted to the stunt in a post to Parler early on Friday morning, saying that while he did burn the BLM banner during a political rally last week, “there was no hate crime committed.”

“Against the wishes of my attorney I am here today to admit that I am the person responsible for the burning of this sign,” Tarrio wrote, adding “I didn’t do it out of hate…I did it out of love,” and that the sign-burning “wasn’t about race, religion or political ideology,” but rather “a racist movement that has terrorized the citizens of this country.”

The mea culpa came after both local police and the FBI launched a hate crime investigation into the episode, offering $1,000 and $2,000 rewards, respectively, for information leading to an arrest, according to the Associated Press. In addition to the destroyed BLM banner, authorities also alleged damage was done to local churches.

The incident took place during a rally in the nation’s capital last weekend in support of President Donald Trump. Footage of the sign-burning captured by RT’s video agency, Ruptly, showed one man dousing the banner with fuel to chants of “f**k Antifa!” and “USA!” from a rowdy crowd. A second BLM banner was also apparently pulled off another church and torched, though it’s unclear whether Torrio’s admission referred to both.

The MAGA rally saw brawls between supporters and opponents of the president later in the night, with police making several arrests and four people being rushed to the hospital in serious condition after they were reportedly stabbed in a bar fight. The establishment, Harry’s Bar, is a known hangout for Proud Boys members, and was the scene of one of Saturday’s sign burnings, according to journalist Ford Fischer.