Code red for politicians? Alarmist climate report fuels hysteria, but ‘saving the planet’ is really about elites saving themselves 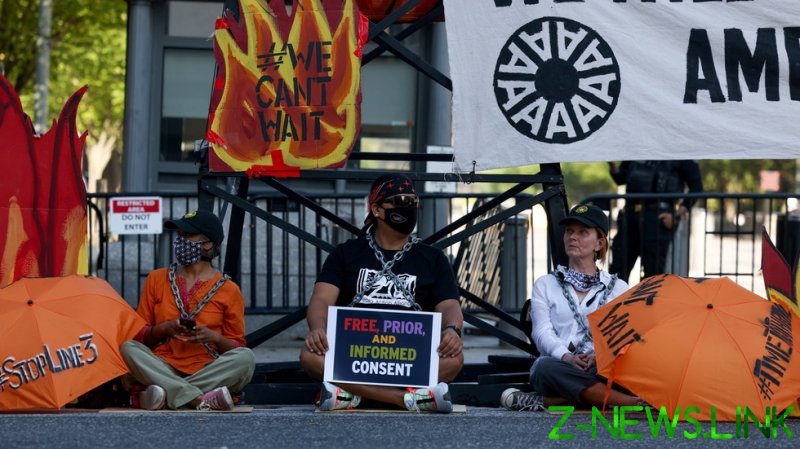 The Intergovernmental Panel on Climate Change (IPCC) has just released the first part of its sixth assessment report – the first such assessment for seven years. The response of the mainstream media has been so predictable that it seemed many journalists wrote their articles in advance of its publication, merely glancing at the final report to throw in some numbers that would give a sheen of respectability to their eco-hackery.

In a statement, UN Secretary-General António Guterres intoned gravely: “Today’s IPCC Working Group 1 Report is a code red for humanity. The alarm bells are deafening, and the evidence is irrefutable: greenhouse gas emissions from fossil fuel burning and deforestation are choking our planet and putting billions of people at immediate risk. Global heating is affecting every region on Earth, with many of the changes becoming irreversible. The internationally agreed threshold of 1.5 degrees Celsius is perilously close.”

Still, that was a calm assessment compared to that by The Guardian’s environment editor, Damian Carrington: “As a verdict on the climate crimes of humanity, the new Intergovernmental Panel on Climate Change report could not be clearer: guilty as hell. The repeatedly ignored warnings of scientists over past decades have now become reality. Humanity, through its actions, or lack of action, has unequivocally overheated the planet. Nowhere on Earth is escaping rising temperatures, worse floods, hotter wildfires or more searing droughts.”

Crikey, you would think millions of people were dying and life on Earth itself was under threat. That isn’t true. This is without doubt the best moment in history to be alive when it comes to more of us being able to live a long life in relative comfort. There also seems to be room for scepticism about the IPCC’s forecasts – for example, that they give too much weight to extreme and unlikely scenarios and thus exaggerate the risks.

But even if we take the IPCC’s claims at face value, a more level-headed approach might be to recognise that economic development, powered by cheap fossil fuels, has enabled billions of people to live increasingly healthier and wealthier lives. Moreover, we urgently need to help lift billions more out of poverty so they have reliable access to food, electricity, sanitation, healthcare and education.

However, emissions of carbon dioxide, methane and other greenhouse gases do seem to have had the side-effect of making the world warmer. For some parts of the world, warming has been beneficial, but for the world as a whole it is likely to have negative effects overall, particularly if that warming turns out to be at the high end of estimates.

If we can find flexible and cost-effective alternatives to fossil fuels, that would help to restrict the rise in temperatures. And if we can avoid burning stuff, we can improve air quality, too.  But if we can’t find those new technologies and techniques, then, on balance, the upsides of continuing development using fossil fuels could very well outweigh any benefits from rapid reductions in the use of oil, coal and gas. A proper cost-benefit analysis, free of political bias, would help.

What should we do instead? It may be more effective to adapt to a warming world or, more likely, adopt a mix of policies that cut greenhouse gases where it is relatively easy to do so, while devoting our energies to coping with higher temperatures.

For example, floods and fires around Europe in recent weeks have led many to conclude that this is just the beginning of a climate catastrophe. But putting in preventative measures to avoid floods and fires, or to tackle them quickly when they happen, will not only reduce the risk from climate change-related disasters, but from all disasters, regardless of the cause. So why not focus on developing the infrastructure and services to reduce the impact of natural disasters rather than spending trillions on cutting emissions?

In fact, that’s what we have long been doing, since long before global warming became a big issue. That’s why deaths from natural disasters have fallen dramatically over the past century or so. So, why not continue to make that our priority?

Those demanding we reduce emissions to ‘net zero’ by 2050 would be wise to explain how exactly they plan to do it. Even if he’s a hypocrite to bang on about climate change while living a billionaire’s lifestyle with multiple private jets, Bill Gates at least has the decency in his recent book to outline what an enormous challenge it would be to end emissions while sustaining decent standards of living.

It’s not simply a matter of politicians developing sufficient ‘willpower’ to do it. It seems impossible in a democracy to impose the kind of crushing reductions in living standards that would be necessary to reach ‘net zero’ – which is why so many eco-warriors want to bypass voters altogether. Just look at the almighty mess Boris Johnson has got into over just one aspect of that, banning gas-powered boilers in the UK, the deadline for which has now been pushed back to 2040.

In reality, politicians and business leaders have seized upon environmental concerns to provide themselves with a purpose, a story they can tell themselves about how to move forward at a time when the world’s developed economies are stagnant and they have no inspiring vision for the future. They’ve spent 50 years developing the idea of ‘sustainability’ to justify their own existence, with frequent prophecies of doom that come and go without coming to fruition.

For example, as long ago as 1992, former US vice president Al Gore said in an interview: “The task of saving the Earth’s environment is going to become the central organising principle in the post-Cold War world.” Without a communist threat to point to and say, “Well, it’s even worse over there”, Western elites have been scrabbling around for another Big Idea, and they’ve decided that environmentalism is the nearest thing they have. That’s why they’ll keep banging on about how we’ve only a few weeks/months/years to avert disaster by completely reorganising society around ecological principles.

In truth, the overheated claims about ‘saving the planet’ are really about the elites saving themselves.