Home / WORLD / Cocaine-addled quail is only the beginning: Rand Paul warns of fallout from impossible-to-pay-for inflation

Cocaine-addled quail is only the beginning: Rand Paul warns of fallout from impossible-to-pay-for inflation 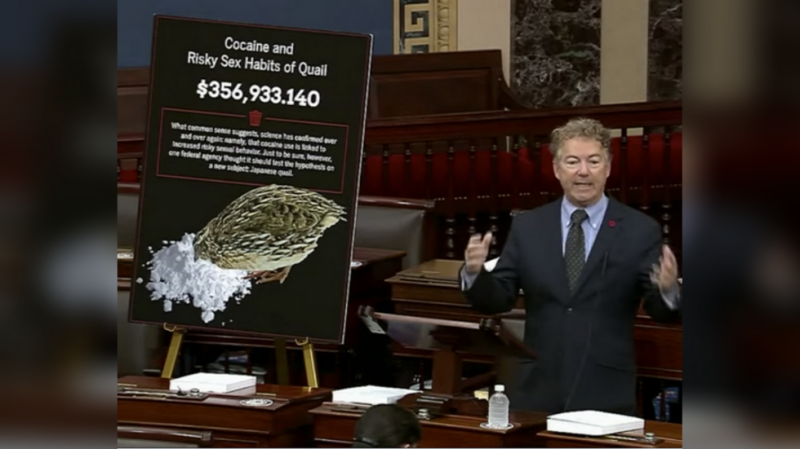 Paul tore into Washington’s profligate spending on Friday, suggesting if the US didn’t put a stop to its money-printing and -borrowing addiction, the market was liable to self-correct and leave Americans carting around wheelbarrows full of worthless cash, all because their country had wasted its money studying the ins and outs of obscure animals’ behavior, or whether smiling selfies made the photo-taker happy, or other dubiously useful hypotheses.

Not only was the country $28 trillion in debt, but there was no legitimate reason – according to Paul – to spend money on goofy projects like figuring out why lizards “waddle” when they walk or the exact words used by American astronaut Neil Armstrong when he made his historical statement upon landing on the Moon.

When the time came for annual budget requests, Paul explained, backed by a memorable poster from a National Institutes of Health study titled “Cocaine and risky sex habits of quail – $356,933.14,” researchers focused on one subject all call their friends to cash in favors. Cocaine and quail enthusiasts in line, the lead researcher would present his peers’ support as proof that the latest quail-sex-cocaine study would get however much money it asked for, making the point that budgets only move in one direction – up.

…Paul’s nemeses came forward to denounce the quail/coke study as a dissertation in dishonesty.

It sure beats starting wars, though, no? Though some complained about the ethics of wasting the “good stuff” on quail.

Paid for by the National Institutes of Health with money that could have cured disease, the coked-up quails merely represent government waste in Paul’s view. But the NIH has also reportedly paid for gain of function research into bat coronaviruses, conducted in China and prohibited by the Centers for Disease Control – a much less harmless outlay that was, like the quails, nevertheless paid for by the US taxpayer.

When gain of function research was allowed to return to the US in December 2017, it was only after the National Institute for Allergies and Infections Disease head Anthony Fauci had allegedly ushered the taxpayer dollars overseas to continue the all-important research in Wuhan, China. When Paul confronted Fauci with this allegation earlier in May, Fauci denied gain of function research was involved, or that NIH ever funded the Wuhan lab. He has, however, later admitted to funding EcoHealth Alliance – a group that partners with the Wuhan Institute of Virology in China.

Dr. Fauci earlier this month did a surprise about-face on whether the novel coronavirus had emerged from a Wuhan wet market – the initial hypothesis, but one with which many experts found fault – or whether it had leaked from a lab. While he had long insisted on the wet market, he suddenly began suggesting the US investigate the lab-leak theory, one supported by former president Donald Trump.

The sudden shift in “official” opinion was so shocking that Facebook had to change its censorship-based definition of reality, putting an end to its practice of removing posts arguing the coronavirus had indeed leaked from a lab in Wuhan. Some senior elements in Beijing, too, have renewed their claims that the coronavirus was brought to Wuhan by the US military, possibly during the Military World Games, held in October 2019.