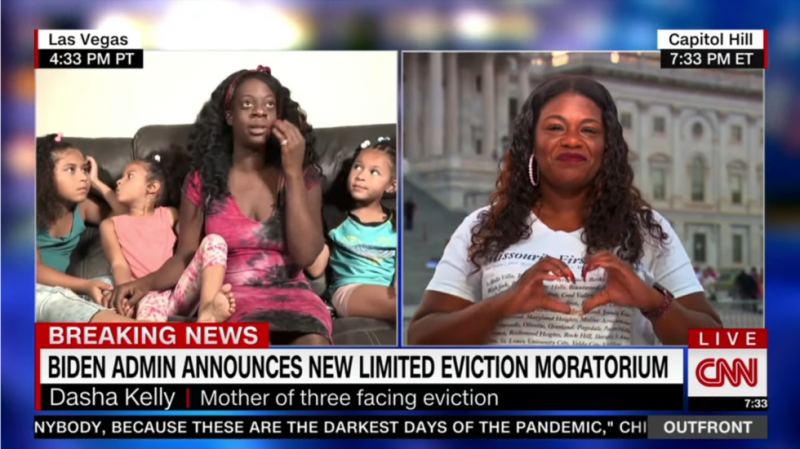 Airing last week, the segment saw CNN’s Nick Watt interview Dasha Kelly, a presumed single mother of three girls, at her home in Las Vegas. Kelly told Watt that she lost her job due to the pandemic and that ‘her’ kids, aged 8, 6 and 5, did not grasp their situation as the CNN chevron read: “Mom braces for eviction: ‘How do you explain that to your kids?’”

Featured in CNN’s initial reporting was Kelly’s GoFundMe page, which she set up to help raise funds to pay $1,900 she owed in back rent. In the original description for the fundraiser, Kelly styled herself as the mother of the girls, who was “maintaining just fine before this pandemic hit,” but was now struggling to make ends meet. “As you all know it is entirely still to hot [sic] to be homeless. My daughter’s are aged 5, 6, and 8. Please help with anything you can,” she wrote.

CNN revisited Kelly’s tear-jerking story after the Centers for Disease Control and Prevention (CDC) issued a new 60-day moratorium on evictions last Tuesday, in what President Joe Biden admitted was an attempt to circumvent the US Constitution since the original moratorium was declared unconstitutional by the Supreme Court.

The new CNN segment cited one of the most vocal proponents of the extension, Democratic lawmaker Cori Bush. Prompted by the host on air, Kelly poured out thanks to Bush, saying it was an “honor” to speak to the congresswoman as the latter gushed over the display of affection. Bush later shared part of her segment with Kelly, adding that she “loves” her and will continue working on behalf of her and other Americans.

The publicity campaign boosted Kelly’s fundraising effort, with CNN boasting that more than $170,000 were raised in the 24 hours after they aired the story. It was not until the GoFundMe drew well over $200,000 when cracks began to appear in what was touted as a feel-good story.

The new twist was first reported by conservative YouTuber Aidan Kearney, who interviewed another woman who said she was the real mother of the girls seen in the CNN segment. The woman, Shadia Hilo, said she was a single mom of seven kids and was not, unlike Kelly, unemployed, but was juggling two jobs. Hilo said that the girls were staying with her “for years and years” and that she dropped them off to be with their father – her ex-husband – for a week.  “I feel that this is so wrong because they are even aren’t her kids. She isn’t their mom. She has no right to do it,” the woman said.

After the revelation was picked up by Fox News and other media, CNN quietly amended its own story on Monday, though stopped short of retracting it. The update states that Kelly described herself as the mother of the kids to CNN because “she considers to be like one to them.” CNN further acknowledged that the children were “also cared for by their mother, Shadia Hilo, and their father, David Alison, who is Kelly’s boyfriend.”

The revelation brought the GoFundMe campaign to a temporary halt, with CNN saying that the platform has been “in close contact with Kelly and funds will stay on hold until they verify her information.” The platform reported that no funds had been withdrawn yet, CNN said.

After the unravelling of her story stoked controversy, Kelly attempted to clarify her status in a fundraising update, now stating that the girls see her as “a mother figure.”

“My partner is the children’s father whom I do not live with, and I take care of these girls in my home for periods of time, and have for the last couple years,” Kelly wrote, insisting that this “detail” won’t change her need for donations to avoid eviction and support her family, as well as putting money in a savings account for the girls.