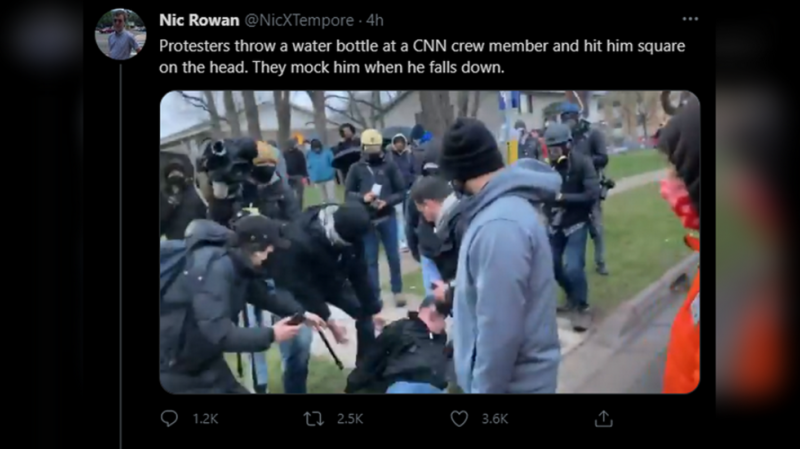 CNN’s Miguel Marquez and his team were covering the fourth night of demonstrations in the Minneapolis suburb on Wednesday, which were sparked by Wright’s killing during a traffic stop.

Videos posted to social media show that the CNN crew was harassed and eventually driven away from the area by protesters outside the Brooklyn Center police station.

As protesters surrounded the group, one member of the crew was hit in the head with a water bottle, causing him to stagger backward before collapsing. His colleagues helped him to his feet and called for medical assistance. He then tried to confront the demonstrators but was held back by his associates. After recovering from the blow, the man told the crowd that had gathered around him that he was “fine” and that it was “all good.”

But the situation only escalated from there. The crew was filmed hurrying back to their cars as they were followed by demonstrators.

“We’re leaving, we don’t want any trouble,” the man who was hit with the water bottle said as he got into his car. The vehicle was then pelted with eggs.

“What did they do?” one person can be heard asking in the clip.

“CNN being some b***hes,” another person replies.

It’s unclear what sparked the confrontation, but one media report claims that protesters turned on the television crew after demanding that they focus on demonstrators, and not the large police presence guarding the precinct building.

Marquez later took to Twitter to reassure the public that all was well and that he was committed to reporting on the ongoing situation in the city.

“My team and I are fine and I appreciate your concern. I hope for equal justice under the law and will continue to report on this vital story as it unfolds,” he wrote.

This is not the first time that CNN’s presence at the demonstrations has led to issues. On Monday, CNN’s Sara Sidner was lectured on-air by a man who accused the network of making clashes between protesters and police worse.

Wright, a 20-year-old black man, was killed on Sunday after a police officer allegedly reached for her firearm instead of a Taser while trying to detain him. His killing coincided with the trial of former police officer Derek Chauvin, who stands accused of unlawfully killing black man George Floyd last year. Floyd’s death sparked large demonstrations across the United States, with many of them descending into violence.