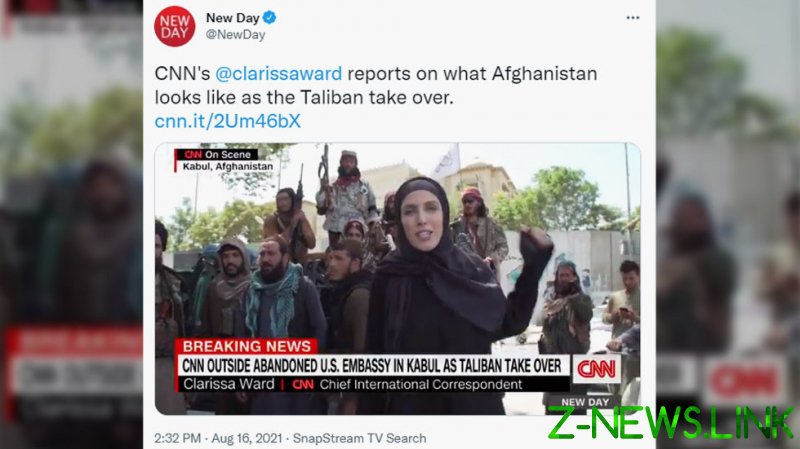 Reporting live on-air from outside of the United States’ abandoned embassy in Kabul, CNN recorded a group of armed men in a truck with a Taliban flag, who chanted ‘Allahu Akbar!’ (‘God is the greatest’) while at least one of the group also appeared to be shouting “death to America!”

Ward – who could be seen wearing a full, black Islamic head covering after the Taliban took over the city – told viewers “they’re just chanting ‘death to America’ but they seem friendly at the same time. It’s utterly bizarre.”

Shortly after Ward commented on the seemingly “friendly” group, she told the camera that she had been ordered to stand to the side of the road, “because I’m a woman.”

While some social media users objected to Ward’s claim that the whole crowd was chanting “death to America!” since many were merely chanting “Allahu Akbar!” others simply ridiculed the report for her description of the ruthless militants.

One user blasted CNN as a “disgrace” over the clip.

“Peak CNN is hearing a group of extremists chant ‘Death to America’ and still coming to the conclusion that ‘they seem friendly,’” tweeted Tyler Cardon, CEO of the conservative Blaze Media. Meanwhile, Firstpost senior editor Sreemoy Talukdar argued that CNN was giving satirical websites the Babylon Bee and the Onion “a run for their money.”

Republican Senator Ted Cruz of Texas also weighed in, asking: “Is there an enemy of America for whom @CNN WON’T cheerlead? (In mandatory burkas, no less.)”

Many others also noticed Ward’s change of clothing, comparing her new conservative head-covering to her previous reports from Kabul, where her hair, neck, and ears could be seen.

In her report, Ward said she had seen “far fewer women” than she would “ordinarily see walking the streets of Kabul,” and added that the women she had seen “tend to be dressed more conservatively” than they were the day prior. She also addressed her own attire.

“Obviously I am dressed in a very different way to how I would normally dress to walk down the streets of Kabul,” she said.

Asked whether those eligible to be evacuated from Kabul to the US could safely get there during the present time, Ward shook her head and said, “There’s definitely no plan in place to try to evacuate these people safely. The US is really barely able to keep a hold on the situation at the airport right now, let alone trying to extend some kind of corridor for people to leave through, so that is simply out of the question.”