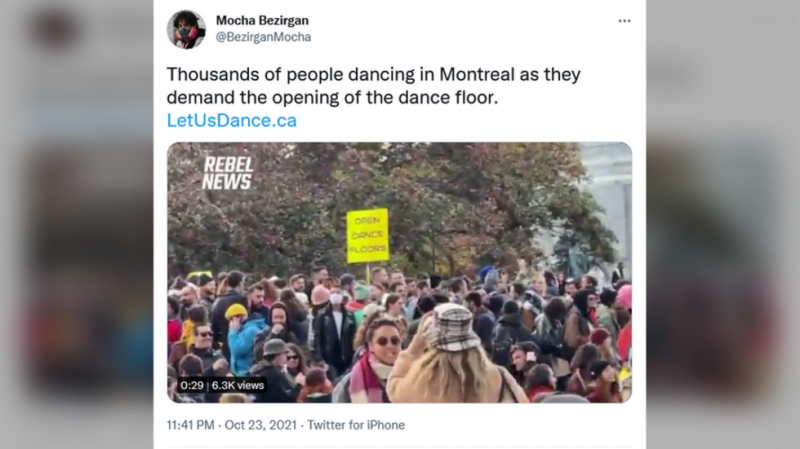 A large crowd of people staged a dance party-slash-protest west of downtown Montreal on Saturday. The demonstrators, some of them wearing party costumes, held signs reading “open the dance floor” and “dance for the right to dance” as music blared from a loudspeaker.

While Quebec eased many of the pandemic restrictions on indoor venues, and clubs and bars have been able to welcome visitors since summer, the ban on dancing and karaoke persists, prompting frustrated club owners and revellers to question the government’s logic. Critics of the ban point out that major concert venues have already been operating at full capacity, citing the example of The Bell Centre in Montreal, which hosted a gig by pop stars Ricky Martin and Enrique Iglesias as recently as last week. It was estimated that some 15,000 fans filled the area to see Martin and Iglesias’ show last Saturday.

Along with British Colombia, Quebec, where some 75.32% of residents are fully vaccinated, remains the only other Canadian province where the seemingly innocuous activities remain off limits.

Club owners have long been pushing for the reversal of the ban, arguing that the policy has given rise to ”underground” nightlife industry, where the mask mandate and other pandemic-related restrictions are ignored and people are free to dance and sing. One Montreal club owner told Global News Canada that he was prepared to bear with all the restrictions imposed by the government, ranging from masks to vaccine passports, if given the green light to legally reopen the dance floor.

“Montreal is one of the last few cities in the world where you still can’t dance, and we have one of the highest vaccination rates in the world for adults,” Mathiue Grondin, the co-founder and director of an industry advocacy group, pointed to the outlet, denouncing the ban.