Home / WORLD / Close call: McGregor and Khabib ‘come within SECONDS’ of bumping into each at Fight Island hotel (VIDEO) 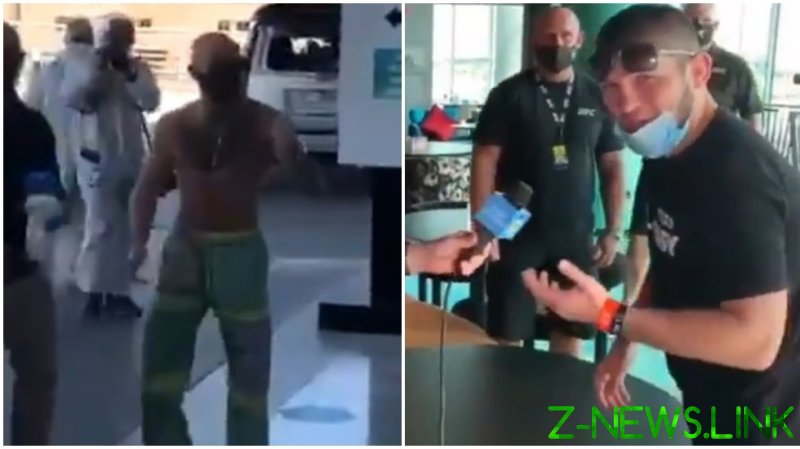 Days out from his UFC 257 rematch with Dustin Poirier which will top the UFC’s latest Fight Island residency on Saturday night, one would be forgiven for thinking that Conor McGregor may well have gotten his hands dirty in an Abu Dhabi hotel lobby this week had he arrived for his period of enforced isolation ahead of the fight card just a minute or so later.

McGregor had been encamped on a private yacht since arriving on site for this weekend’s fight but regulations in place to help prevent the spread of Covid-19 mean that the Dubliner is required to move his camp to the official fighter hotel for two days of quarantine.

And per footage released by Dan Hardy’s MMA YouTube channel, Full Reptile, McGregor purportedly avoided running into Khabib by around 30 seconds or so.

When questioned by fans whether the clip was carefully edited or the two UFC superstars had indeed come close to what could have been a highly tense confrontation, the YouTube channel replied that “he genuinely did miss him by 30 seconds.”

Khabib, who will be in attendance at Wednesday’s fight card to corner his cousin Umar Nurmagomedov ahead of his UFC debut, had been the subject of intense speculation in recent days after UFC boss Dana White trumpeted an impending statement on the future of the reigning lightweight champion.

White had been keen to discuss Khabib’s retirement and had hoped to persuade the Russian fighter to stay on for one final fight in pursuit of a perfect 30-0 career record but when the announcement came, it wasn’t black nor white – but more a shade of grey.

Per White, Khabib is going to watch this weekend’s key lightweight fights and may indeed return if he sees the type of standout performance which could tempt him to return to the cage.

But judging by the above video, it seems we might have come close to an unlicensed rematch in front of the world’s watching MMA media.