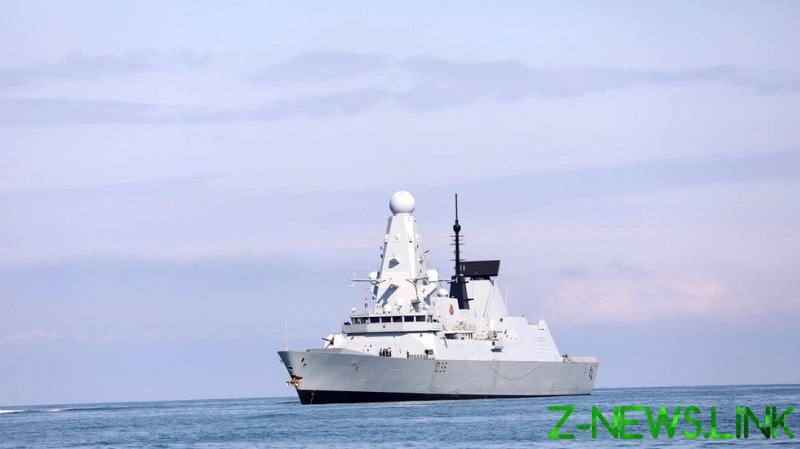 The 50-page dossier, containing classified information about the HMS Defender’s journey through the Black Sea, was reportedly discovered in a “soggy heap” behind a Kent bus stop on Tuesday morning. The person who discovered the documents contacted the BBC upon realizing their sensitive nature. The dossier includes emails and PowerPoint presentations, and is believed to have originated in the office of a senior Ministry of Defence (MoD) official.

A spokesperson for the ministry said that an employee had reported the loss of sensitive papers, adding that it would be “inappropriate” to comment further. An investigation is now underway to determine how the documents ended up at the bus stop, the BBC said.

The MoD viewed the Royal Navy destroyer’s mission, dubbed “Op Ditroite,” as an “innocent passage through Ukrainian territorial waters,” the secret documents reportedly show. British military planners believed that they had a “strong, legitimate narrative” for passing through the disputed area, and said that having journalists aboard the warship would help provide “independent verification” of the vessel’s actions.

However, there was apparently an understanding that the Russian military would likely view the HMS Defender’s travel itinerary differently.

“What do we understand about the possible ‘welcome party’…?” asked one British military official, during high-level discussions that were detailed in the classified dossier.

A series of slides prepared by the UK’s Permanent Joint Headquarters (PJHQ) offered two potential routes through the Black Sea, with one described as “a safe and professional direct transit from Odessa to Batumi.” The plan included a short stretch through a “Traffic Separation Scheme” located near the southwest tip of Crimea. Choosing this route would  “provide an opportunity to engage with the Ukrainian government… in what the UK recognises as Ukrainian territorial waters,” one of the slides explained.

The BBC said that the mislaid dossier outlined potential Russian responses, ranging from “safe and professional” to “neither safe nor professional.”

The documents also discussed the possibility of keeping the HMS Defender away from contested waters. This plan would avoid any potential confrontation but would also allow Russia to claim that the UK was “scared” or “running away,” the secret dossier stated.

One of the presentations contained in the trove of classified documents noted that contact between Russian and British forces in the area have largely been “unremarkable” but that, “following the transition from defence engagement activity to operational activity, it is highly likely that… interactions will become more frequent and assertive.”

Moscow intercepted the HMS Defender on Wednesday, claiming that the British vessel had crossed into its sovereign waters. Russian officials said that warning shots had been fired and that a jet had dropped bombs before the warship left the area. The UK government has disputed these claims.

Journalists who were aboard the British warship at the time suggested that the confrontation with Russian forces was expected. One reporter noted that “increasingly hostile warnings were issued over the radio” by the Russian coast guard.

On Thursday, Moscow released a video which confirmed the strongly worded radio messages and appeared to show that warning shots were, in fact, fired.

Russia summoned the British ambassador, as well as the UK’s military attache in Moscow, to protest over the incident.