Home / WORLD / Civil war, medical discrimination, spy satellites and cyborgs! How 2021 could make us yearn for 2020

Civil war, medical discrimination, spy satellites and cyborgs! How 2021 could make us yearn for 2020 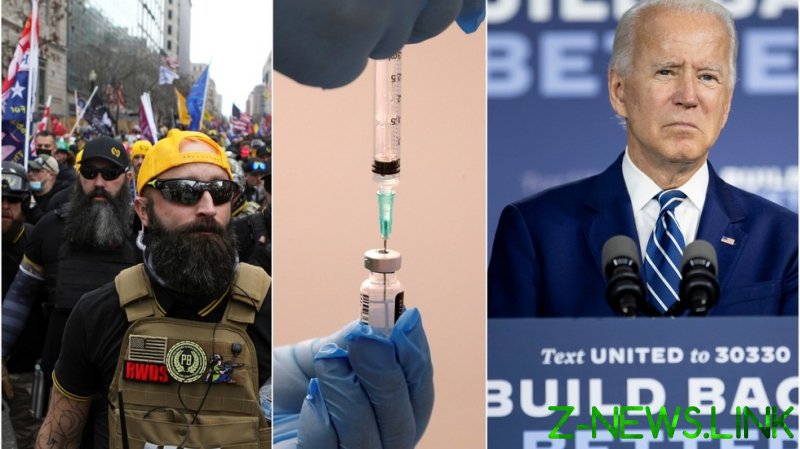 The year 2020 has proven things can always get worse, delivering a worldwide economic depression, a coronavirus pandemic, riots across the US, and unprecedented political division. It’s safe to say most of humanity is eager to close the book on it. But merely putting up a new calendar does nothing to address these issues, which seem certain to reach a breaking point. Humanity has been pushed to the limit with arbitrary rules, enforced poverty, and mandated isolation — it will only take a spark or two for things to explode.

It’s clear from the media establishment’s non-stop fear-porn broadcasts that Covid-19 isn’t going anywhere next year. Even as a growing body of evidence suggests lockdowns and mask-wearing have little if any effect on the spread of the novel coronavirus, governments will maintain these stringent behavioral controls, keeping the public terrified enough to beg for authoritarianism. But as vaccines are rolled out to the general public, the divide between those obeying the rules and the dissidents will only grow.

News outlets around the world have been pushing the narrative that ‘health passports’ outfitted with the bearer’s Covid-19 vaccination status will be required to travel, enter public spaces, and even get a job in the near future. These certificates are already being presented as the only possible route out of lockdown, even as the heads of both Pfizer and Moderna have admitted their vaccines probably won’t stop the spread of the coronavirus. Accordingly, those who decline to get the jab will be treated as pariahs, banned from some public spaces and told it’s their fault life hasn’t gone back to normal, just as so-called “anti-maskers” have been.

The same army of Karens that scream and point at anyone who dares leave home without their face covered will gleefully rise to the occasion of doxxing, outing, and tormenting vaccine skeptics. Anyone who isn’t thrilled by the idea of ingesting an experimental compound whose makers have been indemnified from any lawsuits will be deemed an enemy of the state, even separated from their children or removed from their home as a “health risk.” Neighbors will gleefully rat each other out for the equivalent of an extra chocolate ration, meaning even the most slavishly obedient individuals could end up in “quarncentration camps” for upsetting the wrong person.

Even those who’ve remained silent about masks and lockdowns, afraid of “making waves,” are unlikely to take involuntary inoculation lying down. Almost two thirds of Americans aren’t interested in taking the vaccine, meaning the Karens and the kapos may run into unexpected resistance.

In the US, the increasingly certain reality of a Biden presidency is also likely to push some people over the edge, though the president-elect seems to have realized that shoving his whole program down American throats at once will make the country choke. Even so, Biden and his vice president Kamala Harris have made enough statements on gutting the First and Second Amendments, turning the suburbs into mini-cities packed with government-subsidized housing, and adopting Green New Deal carbon controls that half the electorate sees their inauguration as a threat to their way of life.

Rumors of militia groups, veterans, and even active-duty military rising up against the supposed communist takeover may seem far-fetched, given such groups’ willingness over the last year to allow government to trample over such fundamental freedoms as the right to earn a living or even leave one’s house, but seeing Trump leave the White House could be the straw that broke the camel’s back. These groups are well-armed and will easily wipe out whatever Antifa cannon-fodder the neoliberal centrists can throw at them. Nor can the establishment necessarily count on police to save them, having spent the last several months calling for defunding law enforcement. Trump’s call for “wild protests” in January, coupled with his former national security adviser Mike Flynn cheering for martial law, have been interpreted as a green light to do whatever it takes to keep the White House out of Democrat hands.

The centrist establishment isn’t helping matters by declaring Trump supporters to be essentially subhuman and not worth conversing with. Worse, by promoting doxxing anyone who’s ever expressed the “wrong” ideas on social media, they’re only stirring up conservative resentment. The longer economic shutdowns last, the more likely disaffected Americans are to decide they have nothing left to lose and attempt to take a few establishment types out with them.

Not that all in opposition to Biden believe the sundowning centrist plans to install a dictatorship of the proletariat, of course. Many fear his use of the “Build Back Better” slogan popularized by proponents of humanity’s soulless “new normal” suggests his administration will be responsible for the US implementation of the World Economic Forum’s Great Reset, a much more terrifying prospect than some milquetoast Marxism. This disturbing plan, devised by WEF CEO Klaus Schwab and a coterie of wealthy financiers and businessmen, aims to do away with private property, bodily integrity, familial bonds, and other pillars of western civilization, while shifting the world’s finances to blockchain-based Central Bank Digital Currencies (CBDCs) and doing away with cash.

Coming off like a Bond villain straight out of central casting, Schwab has enthused about the coming merger of humans with technology, which will enable whole new spheres of individual and social control. From Microsoft founder Bill Gates’ plan to blanket the earth with spy satellites, to DARPA’s efforts to bring surveillance under the skin with “hydrogel” sensors that monitor vital signs and transmit the data to the cloud, the global technocracy these oligarchs seek will change what it means to be human – a feature, not a bug, in their eyes. And while the vast majority of western society seems utterly supine now, it’s unlikely they’ll sit idly by while the rich and powerful strip them of their humanity. The WEF’s smiley-faced propaganda (“Welcome to 2030. I own nothing, I have no privacy, and I couldn’t be happier”) may well be its epitaph.