Chips and cakes out, algae burgers in: Britain’s mad nanny-state ‘snack tax’ plan is enough to make you sick 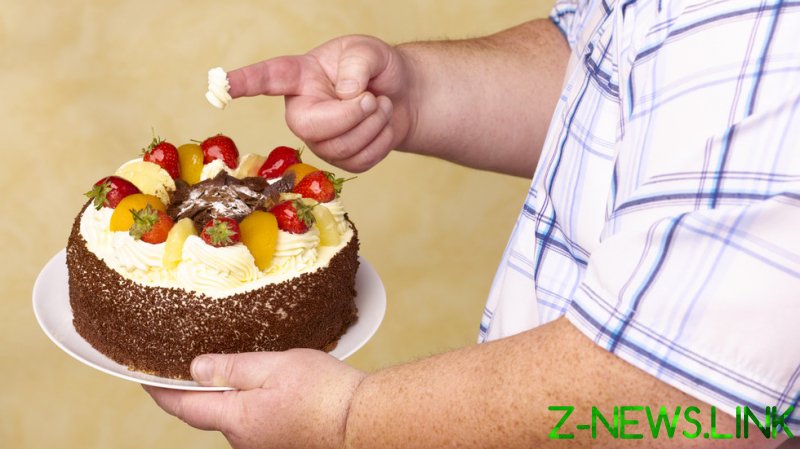 Listen, all you politicians and bloody do-gooders: if I want to eat fish and chips followed by a tasty deep-fried Mars bar for dessert every day for lunch, what the hell has it got to do with you?

If, in the evening, I fancy sinking eight pints of Guinness in the bar down the road while I ram crisps and pork scratchings down my gullet and then stagger into a Maccy D’s or a kebab shop on the way home… again, what’s it got to do with you?

You’ve already forced me outside to smoke a fag, even in the rain and snow – and you even want to stop me doing that now, too. So, leave me alone and take your ridiculous new National Food Strategy with you.

After all, some people suit a ruddy, acne-splattered complexion. It’s got to be more attractive than Prince Harry’s ginger-bloke freckles. And the voluptuous belly and clinical obesity? What about it? It creates a market for supersized clothes, doesn’t it?

Plus, seeing a super-fat – and I mean, like, MASSIVE – bloke wobbling down the road eating a doughnut just makes everyone who’s a tad overweight feel a little bit better about themselves. Everyone needs someone over whom they can feel superior. “Look at that bloater! At least I’m not as fat as him! Oi, fat boy! Keep up the good work!” We should salute these people. They perform a public service.

Ah yes, public service. That’s where Henry Dimbleby’s food strategy report comes in. The Dimbleby family are well known to most of us Brits. This clan has been all over TV and radio pretty much forever (and being paid handsomely for it too, by the way).

First there was Richard, who was on Beeb outlets a lot after the war. He had two kids, who went on to become famous broadcasters. David is the more famous – he presented ‘Question Time’ and was a regular on the BBC’s election-night coverage. Jonathan, his kid brother, was a BBC trainee, but is perhaps better known as an ITV presenter. And now a next-generation Dimbleby has marched into the spotlight, doing his bit for the ‘public good’.

Yes, here comes Henry Richard Melville Dimbleby, the Eton-educated son of David. Henry is Prime Minister Boris Johnson’s adviser on food. It is he who wants to stop us all from stuffing our faces with crap to the point where we fall face-first into a chicken vindaloo.

His brilliant plan is to slap the world’s first ‘snack tax’ on sugary and salty foods, which would add a whopping £3.4 billion a year to Britain’s shopping bill, making each family in the country £240 worse off. That cash would be generated by adding a £3 per-kilo tax on sugar and £6 on salt sold wholesale for use in processed foods, restaurants or catering.

But, let’s face it, it’s the plebs who would pay that bill. It’s the poor and the ignorant who eat the crappiest food. Bad diet contributes to 64,000 deaths every year in England.

So, this extra cash would be used by doctors to – wait for it – prescribe fresh fruit and vegetables. There would also be cookery classes on the NHS. Genius. Maybe they could also prescribe one of mummy Dimbleby’s cookbooks? Henry’s mother Josceline Dimbleby has, after all, written 17 of the buggers, and used to be the cookery correspondent for the Sunday Telegraph.

Meat consumption needs to fall dramatically to meet climate-change targets, and Henry’s report recommends fat folk fill their kebabs or burger buns with edible algae or fermented protein instead. Mmm, delicious. But, the first thing to note about this latest Dimbleby, is that, well, he’s a wee bit on the chubby side to be telling other people what to eat. If he was one of those super-fit yoga gurus, fair enough. But he isn’t.

He actually made a fortune after selling his upmarket food chain Leon, which liked to promote a healthy image, but still flogs ‘hot boxes’ that are high in fat and salt. Chips and burgers are also on the menu.

“I wouldn’t recommend any diets that I have used,” he told The Guardian. “My weight oscillates between the high end of healthy weight and the low end of obese, and it is a conscious struggle.”

Fair enough, tubby. And his boss is the same. Boris Johnson isn’t really in a position to lecture the nation on a healthy weight. BoJo, mate, I know you’ve got a new wife who’s nearly a quarter of a century younger than you are, and she might be keeping you in line, but you’re by nature a bit of a porker. You’ve never been the type to deny yourself a tasty treat or two.

Anyway, all this guff’s in the new National Food Strategy report and, as Boris’s ‘food tsar’, Henry’s the guy behind it. British journalists love the term ‘tsar’. It tends to mean someone who comes up with big thoughts on big subjects and then feeds their findings directly into the political machine – advice that is then usually ignored.

And that’s exactly what BoJo did, immediately saying, “I’m not, I must say, attracted to the idea of extra taxes on hardworking people.” It’s also not a vote-winner, Boris.

Ah well, these ‘tsars’ tend to be paid quite well. But Henry, mate, I don’t need you or BoJo or any other nanny in the nanny state to tell me what to eat. I can look after myself. Get yourself down the chippie for a nice pie and chips. It might teach you who would pay your dumb tax bill, as you’ll see them down there in the queue. After all, you’ve probably never actually even met one of these people before.