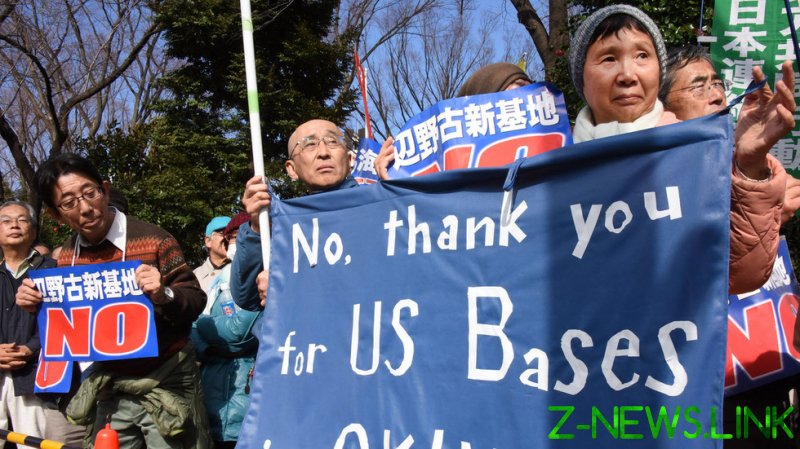 The national government of Japan offered a rare formal apology to the mayor of Ginowan over the actions of US troops stationed in the city. Officials from the Defense Ministry and the Environment Ministry visited Okinawa this week to discuss the dumping of wastewater from the US Marine Corps Air Station Futenma, which was done without the consent of local and prefecture authorities.

“We consider it extremely regrettable that the water was dumped so suddenly,” the head of the Defense Ministry’s environmental policy division told the mayor.

The incident happened on August 26, with the Americans reportedly giving less than an hour’s notice to Japanese officials in Tokyo and Ginowan about their intention to proceed with the dump. Some 64,000 liters of water contaminated with a dangerous pollutant called Perfluorooctanesulfonic acid (PFOS) were poured into the city sewer system. The parties have opposing views on whether the release could be harmful to the environment.

The US military contacted its Japanese counterpart about the plan to dispose of wastewater from the base in early July. It assured that the water was treated to ensure that the PFOS content in it was well below what Japanese rules allow for drinking and environmental water.

The catch is that PFOS is one of the so-called persistent organic pollutants, also dubbed “forever chemicals,” that are notoriously resistant to natural degradation and can accumulate in living organisms over a long time, causing health problems.

Under the Stockholm Convention, a UN treaty aimed at combating such compounds, PFOS is considered a restricted chemical. In 2010, Japan banned its production and currently allows its use in only a handful of manufacturing processes and for firefighting purposes.

The limits on PFOS presence in water were adopted in Japan in 2020. American bases in Okinawa have for years been accused of contaminating groundwater around them with various dangerous compounds, including PFOS, some of which came from accidental discharges of firefighting foam. The latest such incident involving the Futenma base happened in April that year.

Considering that the pollutant is toxic not only biologically, but also politically, Okinawa authorities wanted to conduct an environmental impact study of the US dumping plan. The Marines didn’t wait for permission and made the release a fait accompli.

“I feel strong outrage that the US military unilaterally dumped the water even while they knew that discussions were proceeding between Japan and the United States on how to handle the contaminated water,” Okinawa Governor Denny Tamaki said on the day of the dump at a hastily-gathered news conference.

The Americans had said they couldn’t wait any longer because water reservoirs, in which the waste was stored, were almost full and posed a risk of spillage if there was heavy rain.

Adding insult to injury is the reason that the Americans reportedly gave to Japanese officials during a meeting in July, when they explained why they needed the dump. The base used to hire a private-sector firm to treat the water, but the cost was deemed too high a burden for the US taxpayers. The usual method for disposing of PFOS in Japan is incineration since the compound breaks down at temperatures over about 850 degrees.

The scandal in Okinawa was met with some schadenfreude in China, as evidenced by a cartoon published by the state news outlet CGTN. It highlights a parallel between the incident and how the Japanese government itself approached the disposal of wastewater that was used to cool down the nuclear reactor of the Fukushima power plant. The reactor went into a meltdown after being damaged by the 2011 earthquake and tsunami.

In April, Tokyo announced plans to release more than 1.25 million tons of the water into the Pacific Ocean in about two years, assuring that it would be perfectly safe. The news enraged many regional countries, including China, but the US gave Japan a nod of approval. Beijing suggested that Tokyo should ship the water to Washington at the time.