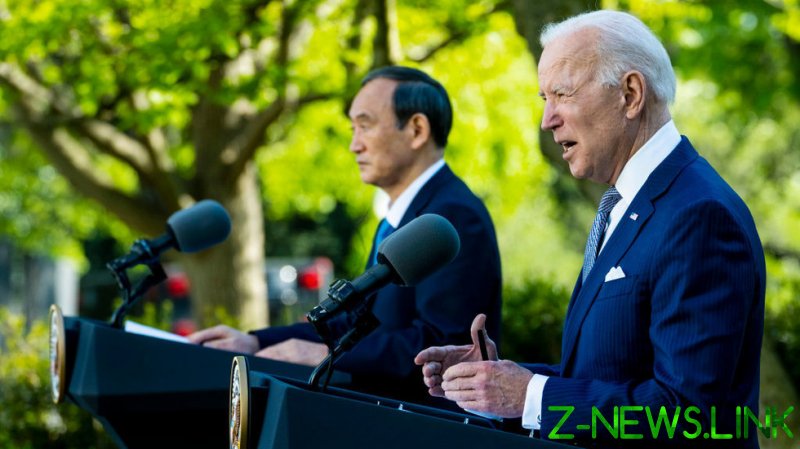 The statement by US President Joe Biden and Japanese Prime Minister Yoshihide Suga, the first foreign leader to officially visit Biden at the White House, was released on Friday. It criticized China, suggesting its actions “are inconsistent with the international rules-based order” and impact “peace and prosperity” in the region.

The alliance between Washington and Tokyo, on the other hand, “has become a cornerstone of peace and security in the Indo-Pacific region and around the world,” and the two countries “are more prepared than ever to address regional challenges,” the statement continued. Beijing’s activities in the South China Sea were mentioned among the challenges, as well as issues in Hong Kong, Xinjiang and Taiwan.

“Japan resolved to bolster its own national defense capabilities… The United States restated its unwavering support for Japan’s defense… using its full range of capabilities, including nuclear,” the statement read.

Beijing condemned the document, saying it went beyond the scope of bilateral relations and interfered in China’s internal affairs. It also endorsed separatist activities, a statement by the Chinese Embassy in the US said on Saturday, as reported by the CGTN news channel.

China, which has for decades considered Taiwan an integral part of its territory, has repeatedly called on the US not to interfere in its domestic policies. Tensions in the South China Sea have long been increasing, with a number of military drills happening in the region, particularly around the island of Taiwan, which considers itself an independent nation and is supported by Western states.