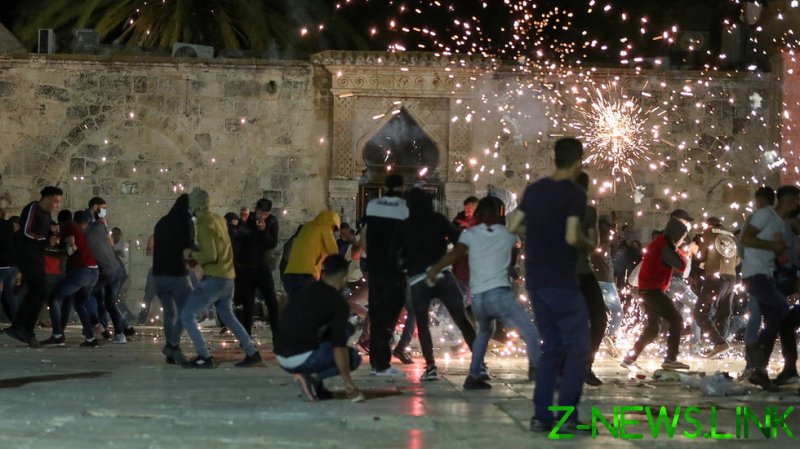 “We must not be dragged into provocations and inflicting harm on people or property,” Sephardi Chief Rabbi Yitzhak Yosef said in a statement on Wednesday. “The Torah of Israel grants no license for taking the law into one’s hands and acting violently.”

Tensions between Israelis and Palestinians came to a head at the weekend over the eviction of Palestinians in East Jerusalem and the Israeli police’s attack on worshipers at the Al-Aqsa mosque.

But on Wednesday night the level of street violence appeared to ramp up, according to local media reports.

In the central Israeli coastal city of Bat Yam, graphic videos shared online appeared to show Israelis drag an Arab driver from his car and beat him viciously in the street. Footage showed the vehicle reversing down a crowded road, apparently in a bid to escape the crowd, before it crashed into another car and the man was pulled out, surrounded and assaulted, according to the Times of Israel. His condition is unknown.

Other footage from the city purported to show Israeli rioters vandalizing shops and other businesses, including an Arab-owned ice-cream parlor.

There were also reports of attacks on Israelis by Arabs, including against a 30-year-old Jewish man in the northern city of Acre. According to the Jerusalem Post, the man was taken to a medical center with a serious head injury after being hit with sticks and stones while in his car.

On Wednesday, Palestinian militants continued to fire rockets from Gaza towards Israel, the Israel Defense Forces said. It vowed to respond with its own strikes.

The Israeli armed forces have already launched a number of strikes on alleged Hamas targets in Gaza, causing dozens of deaths over the last three days and destroying three high-rise buildings.