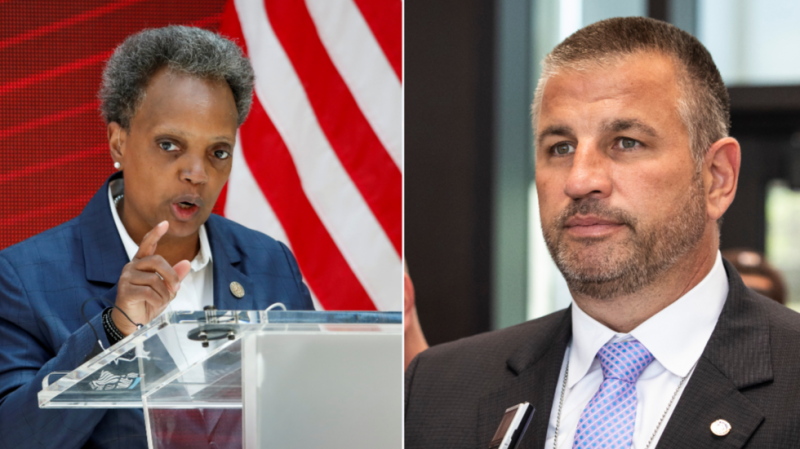 The city on Thursday filed a complaint against the Fraternal Order of Police (FOP) and its president, John Catanzara, for encouraging officers to ignore the vaccine mandate, including Friday’s deadline to report their inoculation status. The FOP shot back on Friday with a lawsuit of its own, demanding that the issue be settled in arbitration and alleging that Lightfoot failed to properly negotiate her vaccine order with the union.

“As Chicago’s mayor, I cannot and will not stand idly by while the rhetoric of conspiracy theorists threatens the health and safety of Chicago’s residents and first responders,” Lightfoot said in a statement. “President Catanzara has time and again deliberately misled our police officers by lying about the requirements of the policy and falsely claiming that there will be no repercussions if officers are insubordinate and refuse to follow a city and department directive or order.”

Lightfoot suggested that the union is encouraging an unlawful strike, but Catanzara said no such walkout has been proposed. He argued that it’s the city that’s threatening to deplete an already understaffed police force by suspending or firing officers who don’t comply with the mayor’s vaccine order.

“Everything from this mayor is a dictatorship,” Catanzara said in a Fox News interview. “This is all about policy from the top. There was no public outcry for this policy to take effect. She just decided she was going to do it and push it on the entire city work force across the board.”

The union chief added that the Chicago Police Department is already operating with 1,000 vacant positions because it’s unable to recruit new officers amid surging crime. About half of officers haven’t been vaccinated against Covid-19, he said, and many of those who chose to get the shots oppose the mandate and the reporting requirement on principle.

“They cannot get anybody to go into the police academy, and yet here she is vilifying the police yet again in a city that has over 185 expressway shootings this year alone, over 280 kids shot this year alone, and she acts like there’s nothing else going on but this Covid,” Catanzara said.

READ MORE: As Chicagoans keep getting shot, mayor Lightfoot doubles down on racist media policy of talking only to non-white reporters

The city’s lawsuit alleged that the FOP is trying to force Lightfoot’s administration to comply with the union’s “extortionate demands” or leave Chicago without enough police on the streets.

Unless the court intervenes, the complaint said, “the city will be faced with an unlawful and untenable Hobson’s choice: either exempt the FOP membership from complying with reasonable and necessary directives needed to combat the COVID-19 pandemic… or be left without a police force sufficient to keep the peace and combat the pandemic of violent crime plaguing the city.”

More than 3,400 people were shot, including 616 fatally, in Chicago in this year’s first nine months. Murders are running about 4% ahead of 2020’s torrid pace and have already exceeded the full-year totals for 2018 and 2019, according to police data. The city had 89 homicides in September alone, the highest total for that month in nearly three decades.

Illinois Governor J.B. Pritzker – who, like Lightfoot, is a Democrat – offered on Thursday to send state National Guard troops to Chicago if the vaccine standoff results in a shortage of police officers.