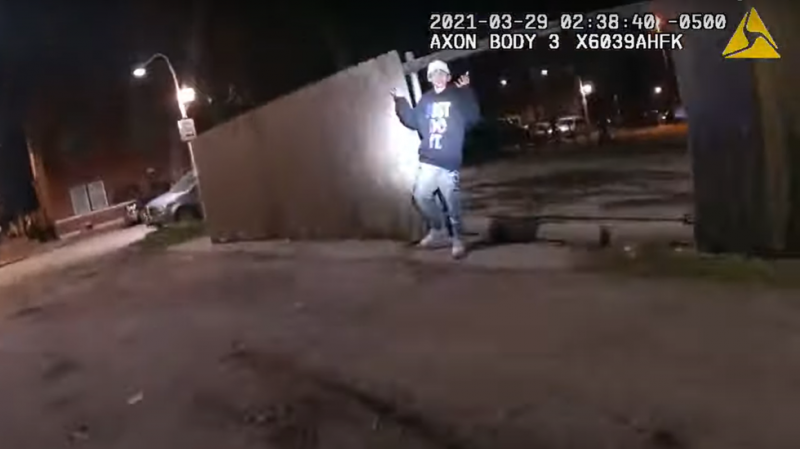 “We understand that the release of this video will be incredibly painful and elicit an emotional response to all who view it, and we ask that people express themselves peacefully,” Mayor Lori Lightfoot and lawyers for the family of Adam Toledo said in a joint statement on Thursday. They added that releasing the video is “the first step in the process toward healing of the family, the community and our city.”

Police bodycam footage showed the split-second decision that an officer had to make before fatally shooting Toledo after a foot chase down a dark alley around 2:30am on March 29. The city’s Civilian Office of Police Accountability (COPA) released a cache of evidence on the incident, including 17 police bodycam videos, 911 calls and third-party videos.

One clip shows an officer arriving on the scene after reports of shots being fired in the area. The officer runs past another person and pursues Toledo, who is seen wearing a white hat and dark sweatshirt. About 10 seconds into the chase, the officer yells at the suspect to stop. A few seconds later, the boy stops with his right arm hidden behind a fence. He then turns toward the officer with his hands rising as he’s told to “show me your f**king hands” and “drop it.” The officer then shoots him in the chest.

“At the time Adam was shot, he did not have a gun,” said Adeena Weiss Ortiz, a lawyer representing Toledo’s family. “That child complied. Adam complied with the officer’s request. The officer saw his hands were up, and he pulled the trigger.”

The whole incident unfolds in about 18 seconds from the time the officer leaves his car to the time he fatally shoots the boy. The point at which Toledo turns toward the officer and is shot as his hands rise takes about one second.

Bodycam video shows the officer calling for an ambulance within four seconds. He quickly tries to assess the boy’s wounds, then begins chest compressions to try to revive Toledo’s heartbeat. Other police arrive on the scene and take over efforts to revive the boy, at which point the officer paces up and down the alley. He then walks behind the fence and shines a light on a handgun seen on the ground, about six feet from the fence opening where Toledo’s right arm was obscured a few minutes earlier.

The incident comes amid increasing tensions over US police violence, particularly cases in which black suspects are killed or injured. The fatal police shooting of a black man on Sunday in Brooklyn Center, Minnesota, led to violent protests and looting at a time when the trial of an officer accused of murdering George Floyd last year in nearby Minneapolis is ongoing.

The unidentified officer in the latest Chicago police shooting is a 34-year-old white man, while Toledo was Latino. The incident occurred in west Chicago’s Little Village neighborhood, which is part of an area that has been nicknamed ‘Mexico of the Midwest’ because of its largely Mexico-born population.

Chicago alderman George Cardenas, whose ward includes the Toledo family’s area, has decried the gang culture in the neighborhood, which is dominated by the Latin Kings. Local news outlet WGN said the bodycam footage is “certain to spark widespread protests” in downtown Chicago, which was hit by two rounds of looting during last year’s Black Lives Matter demonstrations.