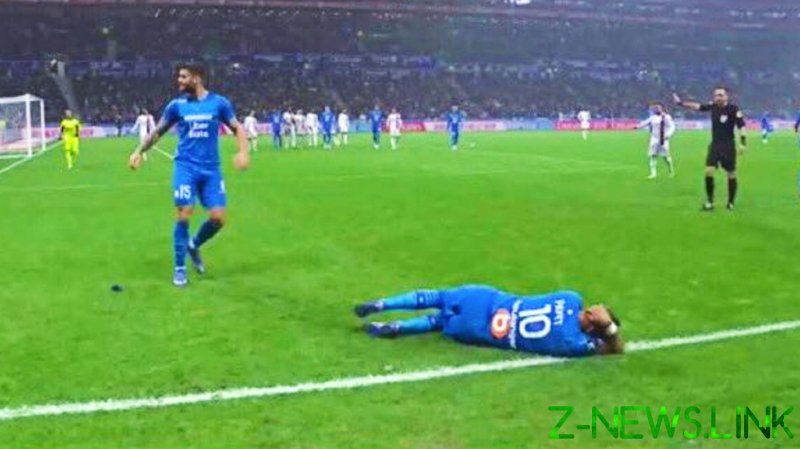 Former France star Payet was placing the ball to take a corner at the 59,000-capacity Parc Olympique Lyonnais when a bottle was lobbed at him from the crowd.

The shocking incident sent the former West Ham ace to the turf after just two minutes of the goalless contest, requiring medical assistance while the match between the Ligue 1 giants was halted.

Referee Ruddy Buquet led the players back down the tunnel with the eyes of the world again on France following several riotous episodes already this season.

The culprit who aimed the missile at Payet was slapped by a fan group leader and ejected from the stadium, according to GFFN.

“Once again, we’re going to see a match interrupted by idiots. It’s not what I want the English, Spanish and Italians to see of the French league.

“In England, people are given lifetime stadium bans. Not one month, not two months – lifetime bans.”

It was unclear whether the game would resume around 45 minutes after Buquet took drastic action.

Lyon fans were reportedly given an ultimatum to calm their behavior via a stadium announcement.

“Dimitri Payet is said to be very shocked,” the outlet said. “The authorities want the match to start again.”

Payet was accused of launching a bottle into the crowd in the notoriously chaotic clash when Marseille visited Nice in August.

The 34-year-old appeared to have been hit on the back by a bottle on that occasion, and he was subsequently handed a one-match suspension for his involvement.

Team-mate Alvaro Gonzalez earned a two-match suspension for his part in the trouble, with Marseille physio Pablo Fernandez copping a ban until the end of June 2022.

There were also troublings scenes when fans invaded the pitch and made their way towards the away section during Lille’s visit to Lens in September.

Riot police were required to hold off the yobs, who held up the game for 90 minutes.