CDC, FDA give green light to J&J jab rollout after pause while investigating death from ‘rare blood clot’ after vaccination 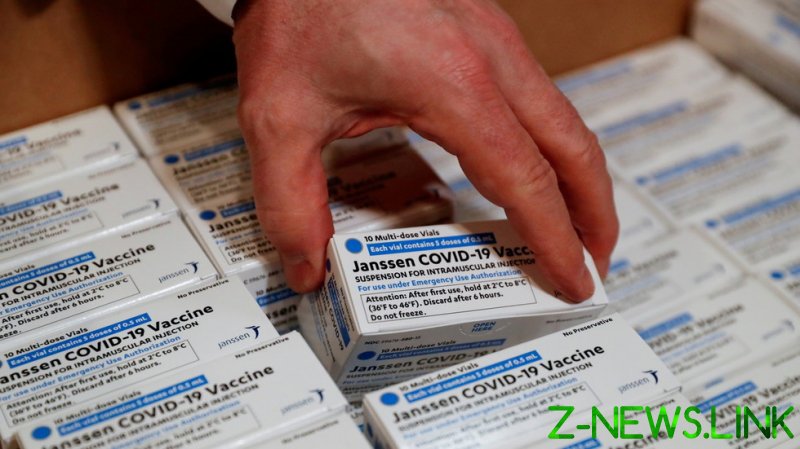 The agencies stated that the risk of thrombosis occurring in patients is “very low,” finding the vaccine safe enough to continue immunizations, while at the same time vowing to “remain vigilant in continuing to investigate this risk.”

“We have concluded that the known and potential benefits of the Janssen Covid-19 vaccine outweigh its known and potential risks in individuals 18 years of age and older. We are confident that this vaccine continues to meet our standards for safety, effectiveness and quality,” Acting  Food and Drug Administration (FDA) Commissioner Janet Woodcock said on Friday, after the CDC advisory panel argued for the resumption of the rollout.

Earlier in the day, the Advisory Committee on Immunization Practices voted 10 to 4 to recommend lifting the 11-day hiatus on Friday, with one member abstaining over a potential conflict of interest. While the panel said the J&J shot’s benefits outweigh its risks, it nonetheless suggested attaching a notice to the vaccine about increased chances for a rare, but dangerous, form of blood clots.

The pause came on April 13, after six patients developed serious blood clots in the days after receiving the J&J immunization. The CDC committee met the next day to review those cases, but decided to take more time to reach a conclusion.

Since then, new reports of blood clotting have surfaced, among them nine additional confirmed cases, bringing the total to 15 out of around 7 million people vaccinated with the J&J shot in the US. Among them, three have died, while seven are hospitalized, according to the CDC panel. On Thursday, the Texas Department of State Health Services reported another possible case, while the CDC said on the same day that it is investigating an Oregon woman’s death from “a rare but serious blood clot” that developed within two weeks of taking the inoculation.

All of the cases have involved women, most aged between 18 and 49, with seven in their 30s. The patients did not have any common medical conditions or take medications that would link the cases, such as obesity or birth control pills.

Following the FDA’s emergency use authorization for the J&J shot in late February, a number of similar reports of blood clots in Europe prompted more than a dozen countries to temporarily halt their own rollouts, with Swedish health officials extending the pause last week. In the time since, European Union regulators gave a green light for J&J vaccinations to resume in the bloc, saying the overall risk-benefit balance “remains positive” and the clotting is a “very rare” side effect, even as some states continue to review the data to reach their own conclusions.