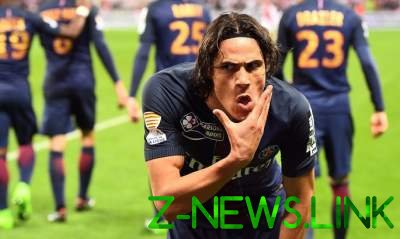 PSG forward Edinson Cavani was the only leader in the struggle for the status of top scorer in Europe.

Last week Cavani took part in the victory for PSG over Monaco. Nearest pursuers the Uruguayan to fill up their scoring balance could not.

By the end of November in the top Championships of Europe’s 12 players scored at least 10 goals each. Lyon is the only team that has delegated to this list more than one player (Nabil Fekir and Mariano díaz).

The top 10 scorers in Europe:

Leadership in the ranking of the best creators in the top clubs of the season continue to divide David Silva (Manchester city) and the Pion Sisto (“Celta”), distributed 8 assists. Behind this Duo are Andres Guardado (Betis), Ciro Immobile (Lazio), Kevin de Bruyne and Leroy Sané (both Manchester city), Antonio candreva and Ivan Perisic (both inter), Luis Alberto (Lazio) and others – for 6 assists.

PSG forward Neymar (8.83 points) after a successful match against PSG have strengthened their position at the top of the ranking of the most efficient players in Europe according to the portal “Whoscored.com”. The Brazilian stalking Lionel Messi (“Barcelona”, 8,67), Nabil Fekir (Lyon, 8,50), Edinson Cavani (PSG, of 8.09) and Paulo Dibala (Juventus, 8,02)

Midfielder Borussia Dortmund Andriy Yarmolenko with a rating of 7.11 points dropped to 231 th. Midfielder “Schalke”, giving two assists in the match with “Borussia” D, made a leap at 713-th row (6.75 points)