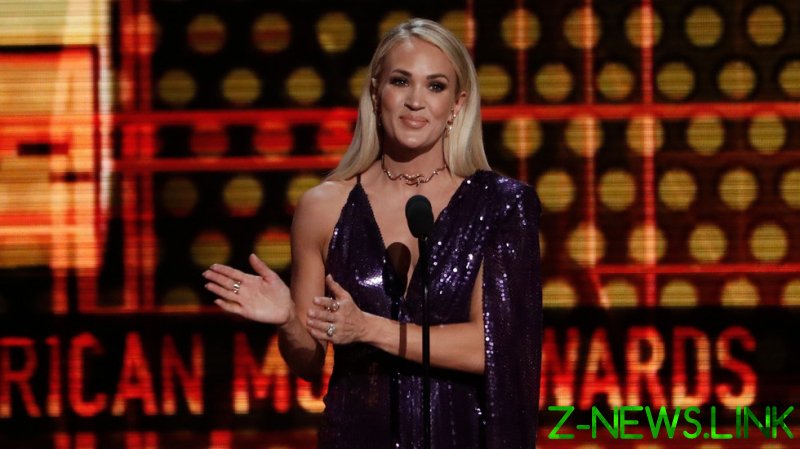 Artists not completely aligned with whatever the daily liberal marching orders are need to make a choice: retreat completely into the shadows or unapologetically express exactly how they feel, cultural and professional consequences be damned.

The blacklisting of conservative artists in the entertainment industry has been well documented over the years, but we have reached a stage where you don’t need to be an outspoken conservative to face consequences. You can simply ‘like’ a tweet.

That’s the situation Carrie Underwood finds herself in. One would assume a country singer being slightly conservative (one of her biggest hits is called Jesus, Take the Wheel) would not be all that shocking, but Underwood appeared to surprise many when it was discovered that she recently ‘liked’ a tweet of conservative blogger Matt Walsh arguing against Covid-19 mask mandates in schools.

She ‘liked’ a tweet. That’s all it takes these days.

The singer has been labeled an ‘anti-vaxxer’ and ‘anti-masker’ for the simple act of clicking a heart button on a short video, while others seem to be having full-blown meltdowns as they deal with the oh-so-very-harsh reality of being a fan of someone whose opinions you don’t 100% agree with.

Some of the attacks have sadly been an extension of a trend of quite vicious reactions to women expressing conservative viewpoints. Pundit Candace Owens has faced outright racism from even fellow female public figures, and we all know how Gina Carano liking anti-lockdown tweets went.

“Carrie Underwood liked my video and now the mob is coming for her. She should know better than to like something that they don’t like. This is an unforgivable sin,” Walsh tweeted about the hoopla.

He’s joking … but only a little.

Underwood has been one of the few celebrities to generally avoid politics in the past. She even told The Guardian in 2019 that she tries to “stay out of politics as much as possible” as people tend to “pin” her beliefs.

“I try to stay far out of politics if possible, at least in public, because nobody wins,” she said. “It’s crazy. Everybody tries to sum everything up and put a bow on it, like it’s black and white. And it’s not like that.”

She was absolutely right then, and the statement unfortunately holds more weight today.

If an artist holds an opinion that may be more nuanced or just plain different from whatever the liberal social norm is (currently, you must be 100% pro-vaccines, pro-masks, pro-lockdowns, and never, ever question government stooges who hide behind ‘science’), it’s usually best to keep your views out of the public eye. Some Hollywood creators that have been linked to conservative causes or Republican politicians tend to be a bit more quiet than the Michael Moores and Kathy Griffins of the world.

This strategy is admirable, but it does not work anymore. We have reached a point where the cultural divide and the tribalism in the US runs so deep, your politics are decided for you before you ever get a chance to explain them yourself.

Just look at Underwood. One ‘like’ on a tweet, and suddenly she’s anti-vaccine, anti-mask, conservative, etc. We don’t know any of this, but this is the point we have reached. Question a mask mandate, criticize Fauci or Harris or even bumbling Biden, and a growing portion of loudmouths will immediately classify you as their idea of a big ol’ mean conservative (and considering the shocking number of comparisons liberal pundits and celebrities have been making between conservatives and the Taliban, they really don’t understand their political opposition in the slightest).

Conservative artists ​​– or more accurately: non-liberal artists – have faced cultural battles for years now, and many times the simple expression of a view or a step out of line is reason enough to face the scorn of either outraged liberals who can find nothing better to talk about or, worse, employers.

Roseanne Barr was canned for a bad joke against an Obama official, a joke she apologized for and tried making amends for by signing the rights over to her own show. Disney-owned ABC continues to profit off of Barr and her creation, but were more than happy to throw her to the curb once they discovered how outspoken of a Trump supporter she was.

Gina Carano was also canned by Disney, not for a joke but for daring to have opinions the company did not approve of.

Artists like Underwood who find themselves disagreeing with the direction of the country during this bizarre pandemic/not pandemic time have only two options now: retreat completely into the shadows or unapologetically express their viewpoint, regardless of potential fallout.

If someone is going to slam Underwood as ‘anti-vaccine’ because she might not want to send one of her two kids to school every single day in a mask, or someone else can describe Carano as a Nazi for opposing lockdowns then those people are never going to be supportive or fans anyway. Either you bring those feelings to the forefront by being honest, or avoid politics completely. There is no in between anymore. Dangerously righteous ‘woke’ warriors and companies fearful of faceless digital mobs have robbed us of that and left us in a culture where those who claim to be the most accepting and tolerant favor villainizing and attacking over nuance and actual discussion.

The line in the sand has been drawn, and if you even toe that line by being a free thinking artist then you are an enemy. There is no discussion, no back and forth, nothing, so artists like Underwood will need to decide whether to stay completely silent in the crowd (and even that sometimes doesn’t work) or march over that line in the sand and never look back.