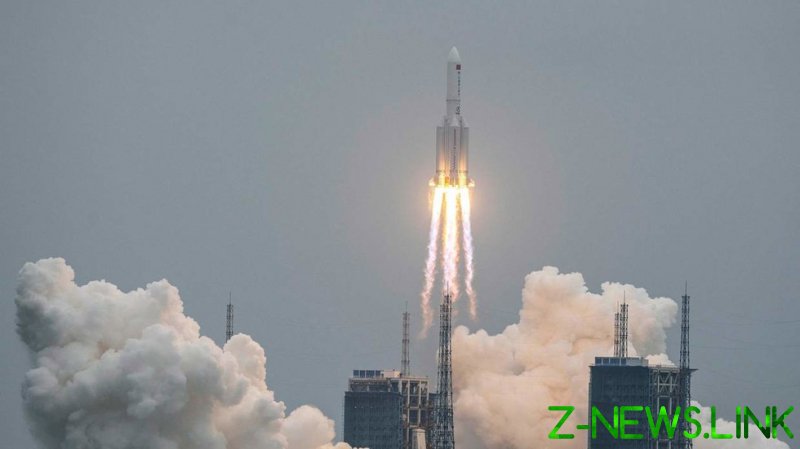 The Tianzhou-2 spacecraft – which will restock the core module with propellant and other supplies – was successfully launched with the Long March-7 Y3 rocket from the Wenchang Spacecraft Launch Site on Saturday.

Other supplies launched on the rocket included scientific equipment and traditional Chinese food dishes, which are being sent ahead of time before astronauts eventually occupy the station. “We will transport support materials, necessary spare parts and equipment first, and then our crew,” explained China Manned Space Agency (CMSA) Director Hao Chun.

According to Xinhua News, “Famous stir-fried Chinese dishes like shredded pork with garlic sauce and Kung Pao chicken are both on the menu.”

Astronaut space suits have also been sent into orbit aboard the Tianzhou-2 spacecraft.

11 more launches are reportedly planned for the space station, which will add two more modules to the core module currently in orbit, restock supplies, and deliver the crew.

China’s previous launch received plenty of negative coverage in the West after it became apparent that parts of the Long March 5B rocket, launched on April 29, would be making an uncontrolled reentry into the atmosphere. Media outlets referred to the debris as an “out-of-control rocket” and speculated that it could cause damage on impact with the earth, while Beijing said the chances of that were miniscule.

As experts tried to predict where the debris would land, US Secretary of Defense Lloyd Austin took a subtle jab at the Chinese space program, declaring that he was “hopeful it’ll land in a place where it won’t harm anyone” and that “for those of us who operate in the space domain, there should be a requirement to operate in a safe and thoughtful mode.”

The debris, however, ultimately burned up over the Indian Ocean and the Chinese government accused the United States of having double standards, pointing out that when SpaceX rocket debris fell on an American man’s farm in March, creating a dent in the soil, US media referred to the incident as a “dazzling light show.”