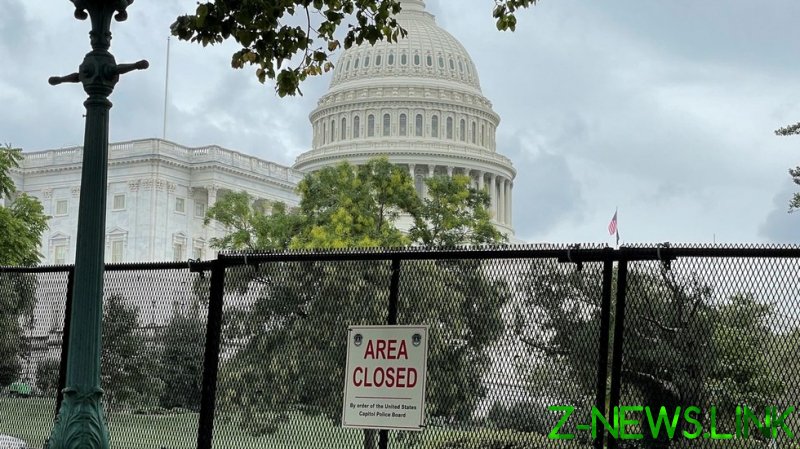 Chief Thomas Manger did not give any details about the alleged threats during a press conference on Friday. He only said that his force is hoping that Saturday’s rally is peaceful, but was prepared in case of violence. Manger had asked the Pentagon for armed National Guard troops, but the Defense Department said Friday that 100 unarmed troops will be stationed nearby instead.

Washington, DC authorities are on high alert ahead of Saturday’s gathering, scheduled for noon local time. The rally is supposed to express solidarity with, and protest the mistreatment of, some 60 or so people jailed over their alleged role in the January 6 riot at the US Capitol, which the Democrats and corporate media have insisted on calling an “insurrection.”

“Our motivation is to raise the profile of our fellow Americans who are having their civil rights abused, being denied their constitutional rights, and are being treated as political prisoners,” Matt Braynard, the former Trump campaign aide organizing the rally, told the Washington Times earlier this week.

Dubbed ‘Justice for J6,’ the rally is “a 100% peaceful event in support of the nonviolent offenders from January 6th who have been charged,” tweeted Braynard, adding that his nonprofit Look Ahead America has held a “dozen” other protests already, including two in DC, and all have been peaceful.

“We are cooperating completely with multiple different police forces to ensure that everyone is safe. Anyone with the intent of committing violence has no business at our rally. Violence is completely contrary to the mission and values of Look Ahead America,” he added.

Hundreds of people broke into the US Capitol on January 6, towards the end of a rally outside the White House in support of then-President Donald Trump. Both chambers of Congress had just started discussing Republican objections to certifying the 2020 election for Democrat Joe Biden, citing irregularities claimed by Trump. The “insurrection” disrupted that debate and when the Congress reconvened, objections were brushed aside.

Federal authorities responded by arresting almost 600 people. A number of people that incited violence, according to federal indictments, were not charged with anything – prompting widespread speculation they may have been FBI informants or undercover agents.

The same sentiment has been in evidence regarding Saturday’s rally, with many Republicans  convinced it will be used by the government as another excuse for a crackdown on political opposition.

Trump himself seems to share that opinion, describing the rally as “a setup” in an interview with the Federalist earlier this week. “If people don’t show up they’ll say, ‘Oh, it’s a lack of spirit.’ And if people do show up they’ll be harassed,” he told the outlet.

House Minority Leader Kevin McCarthy (R-California), said he didn’t expect any Republican lawmakers to attend. However, at least two aspiring congressmen – Mike Collins, who’s running in Georgia, and Joe Kent from Washington state – said they would be there.

Kent, a military veteran, said the only reason he’s speaking is that Americans were being denied their rights “due to their political affiliation and a narrative based on lies.”

“The establishment is lying, they always have been, reject it,” he tweeted.

While the Capitol riot has often been described as a “deadly insurrection,” no one has been charged with insurrection or rebellion. The only person killed during the events was Ashli Babbitt, an Air Force veteran and Trump supporter shot in the throat by a Capitol Police officer, who was not charged and recently boasted on TV about his heroism in the matter. Three more protesters died in unrelated medical incidents.

Brian Sicknick, the Capitol Police officer initially reported to have died of injuries suffered in the riot, actually died from a stroke, the DC medical examiner said in April. At least four other Capitol Police officers have committed suicide since the riot. In a separate incident, officer William ‘Billy’ Evans was killed when in early April, when an African-American man who claimed membership in the Nation of Islam rammed one of the barricades outside the Capitol.

In the days after the January 6 riot, Capitol Police jumped at shadows. A fire at a homeless encampment on January 18 was treated as a potential security incident. In March, the House canceled its session citing “intelligence that shows a possible plot to breach the Capitol by an identified militia group,” which never materialized.

Meanwhile, the Pentagon deployed more than 25,000 National Guard troops to watch over Biden’s inauguration. The last of them were withdrawn at the end of May. Fences around the Capitol were only taken down in July, only to be put back up again in anticipation of Saturday’s rally.