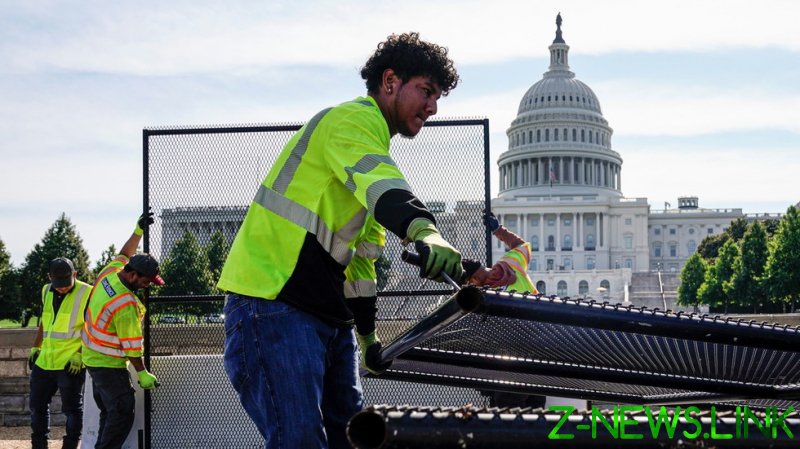 Footage has surfaced of crews taking down the fencing and concrete barriers set up in response to the Capitol riot.

Crews began taking the fencing down on Friday evening, and continued into Saturday. Many rushed to celebrate the fence coming down, both in person and on social media.

Fencing around the Capitol, as well as other increased security measures, had become controversial with some lawmakers.

Democrat Eleanor Holmes Norton, a non-voting delegate to the House of Representatives representing the District of Columbia, had been trying to get the fencing removed and the Capitol opened up again to the public for some time.

“The Capitol grounds were meant to be used as a park, a place for sledding, a place to come and enjoy the open air, and we want it to return to that use,” she told The Washington Post.

Two layers of fencing were erected around the Capitol following January 6. The outer perimeter fencing was taken down in March, but the inner wall has remained, blocking the once open space from the public. Capitol police have said no new fencing is planned.

Some critics took news of the fencing being removed and used it to blast the security measures as “political theater.”

“This part of the charade is over. Six months of political theater, pretending the Capitol was under imminent threat of attack from 70 million Republican voters,” Rep. Thomas Massie (R-Kentucky) tweeted.

More than 500 people have been charged for their involvement in the Capitol riot, though many have seen their trials and potential deals delayed as the Justice Department has been making the costly effort of putting together all footage, social media posts, and documents surrounding the January 6 incident into a database.

Even with the fencing gone, the Capitol is facing some potentially expensive changes, with the House approving a $1.9 billion package in May to finance strengthening the Capitol’s security with extra surveillance and reinforced windows, among other things.