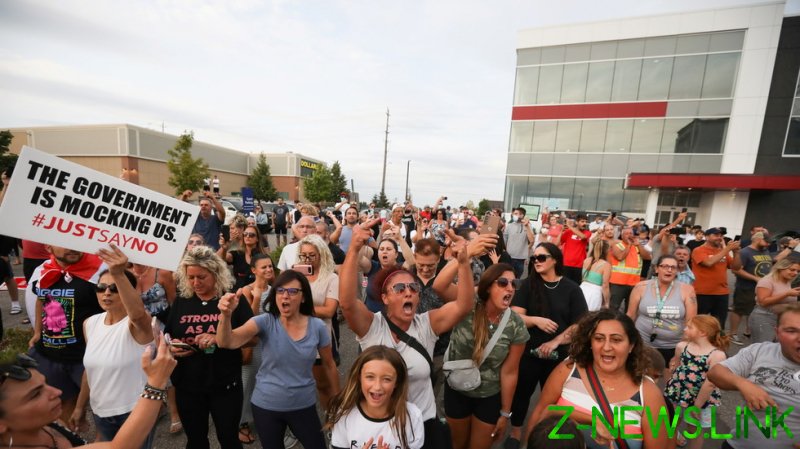 A sizable crowd of protesters attended an outdoor event for the prime minister on Friday, held in a hotel parking lot in Bolton, Ontario, 31 miles (50km) from Toronto. After a two-hour wait, however, Trudeau still hadn’t addressed supporters, and a campaign volunteer informed attendees that the event would no longer take place.

A party spokesperson later said the rally was axed for “safety reasons,” though didn’t elaborate.

Footage of the raucous demonstrators has circulated online, with some heard shouting expletives about the PM, while at least one protester was seen hoisting a flag emblazoned with the words “F**k Trudeau.” Many voiced outrage over Canada’s Covid-19 restrictions and potential vaccine requirements.

According to one journalist present for the rally, some showed up to protest for their “vaping rights,” though she did not elaborate.

Trudeau later relocated the event to nearby Brampton, where he explained that his party “could not guarantee the safety of those in attendance” at the site in Bolton. He called for his detractors to be treated with “compassion,” saying the last year had been difficult for all Canadians, but that a political event is no place for such anger.

“This is not who we are,” he told supporters.

Friday was not the first time Trudeau has been confronted with protesters, many of them angry at his push for vaccine passports, since he hit the campaign trail. The Canadian PM has fired back at demonstrators, shouting “please get vaccinated” on several occasions, prompting some observers to suggest that he himself was to blame for “inflaming tensions” with those opposing mandatory vaccination.

Trudeau, however, signaled that he did not plan to tone down his rhetoric, doubling down on the need for travelers and federal workers to be vaccinated shortly after he was forced to scrap the rally.

“Vaccines are the best way to finish the fight against COVID-19. That’s why we will make vaccines mandatory for anyone boarding a plane or train, or any federally-regulated worker. This is how we will keep everyone, including our kids, safe and healthy,” he tweeted.