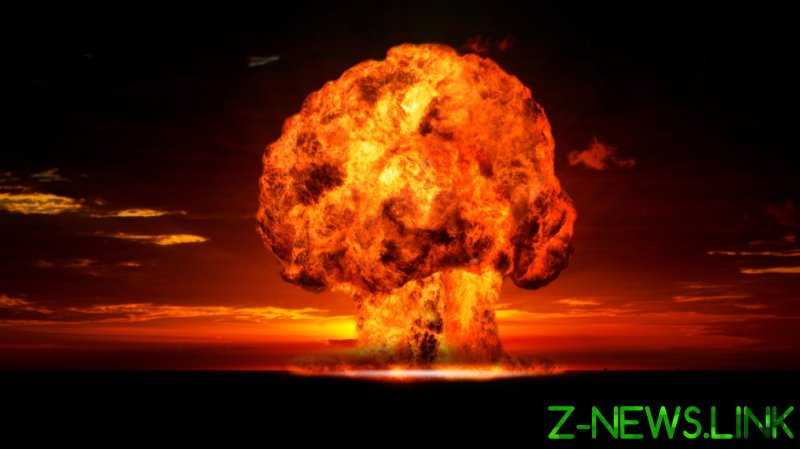 While mainstream Western media have been spending their time trolling about a “missing” Chinese tennis player who is not actually missing, hardly any coverage has gone toward NATO’s announcement that if the new German government does not continue to allow US nuclear weapons on its soil, those weapons will be relocated to the east of Germany. This would put them closer to Russia’s border, a major provocation of Moscow and yet another step forward in the Western empire’s steadily escalating game of nuclear brinkmanship.

“Germany can, of course, decide whether there will be nuclear weapons in (its) country, but the alternative is that we easily end up with nuclear weapons in other countries in Europe, also to the east of Germany,” NATO Secretary-General Jens Stoltenberg said last week.

“Should NATO decide to move U.S. nuclear weapons to Poland, for example, that would likely be seen as a step towards angering Moscow by bringing them closer to the Russian border,” Reuters reports.

Meanwhile, the US is considering sending more weapons to Ukraine as tensions mount between Moscow and Kiev, and Vladimir Putin is warning that Western powers are ignoring Russia’s red lines which are meant to serve as a deterrent to prevent escalation into full-blown nuclear war. The cold war against China has been continually ramping up as well and appears likely to continue to do so for the foreseeable future.

Half of Americans would now reportedly favor going to war against Russia in defense of Ukraine, and a majority would now favor going to war with China in defense of Taiwan. These drastic spikes in opinion are not an accident; the consent has been forcefully manufactured by an aggressive propaganda campaign against those two nations. They are not manufacturing that consent for fun; they are doing it for a reason.

And I just keep tripping on how weird it is that so few people see the US empire’s headlong charge into cold war conflict with two separate nuclear-armed nations as the single most urgent concern of our day. It probably doesn’t even make most people’s top 10. Very few people seem to believe the most pressing threat to humanity might be all those Armageddon weapons we’ve been stockpiling and how increasingly irresponsibly our leaders are treating them.

I write about this issue a lot because to me it seems obvious that when you really look at the facts of the matter, it’s the most worrying thing of all worrying things in this world. It is entirely possible that climate chaos causing heat spikes and flash freezes which destroy plant life could be the thing which sends us the way of the dinosaur, or it could be the reckless development of weaponized artificial intelligence, but those fates are a bit further down the track. There’s only one threat facing us which could technically wipe us all out tomorrow, and it’s the rapidly increasing likelihood of boring old nuclear holocaust.

I write about it a lot, but it’s never shared particularly well. I could get a lot more traction telling people the most urgent threat of the day is government abuses related to Covid, or white supremacists, or one of the two mainstream political factions which so much energy goes into amplifying the enmity between. But when I write about what I see as the actual greatest threat to our world, it’s like yelling into the wind. People don’t want to hear it. My words get swallowed up by a big black hole in the ground and their energy just kind of fizzles.

A big part of it is probably due to the fact that this isn’t something which fits neatly into any of the partisan filters we’ve been trained to view the world through. Detente is no longer an issue promoted by the mainstream parties which present themselves as the ‘left’ end of the spectrum; when aggressions against Russia or China come up, it’s usually in an argument over which one we should hate more. Nobody’s self-reinforcing ideological social media echo chamber is going to help them amplify the message that we’re getting way too close to nuclear war; it’s even a back burner issue for most socialists and anti-imperialists.

Another reason is that people simply aren’t being told about the rising threat of nuclear war with any regularity. Western mass media exist first and foremost to protect and promote the interests of the US-centralized empire, and it’s in that empire’s interests not to have the public too keenly aware of the fact that it is gambling the life of every terrestrial organism on geostrategic agendas of unipolar global domination.

Another part of it is just garden-variety psychological compartmentalization from an uncomfortable idea; nobody likes to think of everyone they know and love being vaporized or dying of nuclear radiation.

Another part might be because people simply cannot wrap their heads around the idea of billions of people dying and what that would mean. It’s been pointed out that most people lack an intuitive understanding of how much more a billion is than a million, which is often cited to highlight the extreme difference between a billionaire and a common millionaire. But it also applies to human lives; we can barely wrap our minds around the idea of a million lives having been snuffed out in the Iraq invasion, much less billions perishing in nuclear war.

Perhaps the biggest part of it, though, is the fact that this threat has been around a long time. I can’t tell you how many older people I’ve had pish-poshing my concerns saying “Bah, I remember doing duck-and-cover drills as a kid! Turned out to be a whole lotta nothing.”

But it was never nothing. We came extremely close to wiping ourselves out multiple times in the cold war between the US and the Soviet Union because nuclear brinkmanship is an inherently unpredictable affair with far too many small moving parts to control, any one of which could set off an apocalyptic chain of events due to something as simple as miscommunication, technical malfunction, or misinterpretation by any of the thousands of individuals involved amid the chaos and confusion of escalating aggressions.

It just doesn’t sit well with people’s understanding of the world that it could all end through the same nuclear Armageddon scenario their grandparents used to worry about. If two men were holding guns to each other’s heads, it would be experienced as very dangerous at first, but after a while, if nobody pulled the trigger, the emotional tension would begin to diminish. If years went by and the men got older it would diminish even further. If they got so old they couldn’t hold the guns anymore and had their children take over for them, and then their children’s children years later, the emotional experience of the standoff would be all but forgotten.

But the guns never got any less deadly. And now the grandchildren of those who initiated the standoff are starting to get careless.

I keep having this scene go through my head where something happens and the nukes start flying and everyone’s surprised, because of all the things they’ve been herded into worrying about, the idea that actual nuclear war could happen was nowhere near the forefront of their awareness. And someone looks out the window and sees a mushroom cloud growing on the horizon and says, “What?? This is how it all ends? With all those weapons we’ve been deliberately building with the full knowledge that they can end it all?”

I mean, how stupid would we feel for having missed that one?

And now there’s a massive push to weaponize space to stay ahead of Russia and China, opening up a whole new dimension of unpredictable moving parts where things can go cataclysmically wrong. You’d think our place on such a precipice would be drawing us all together, but because we’re so manipulated by such deeply malignant forces, we’re instead more divided than ever.