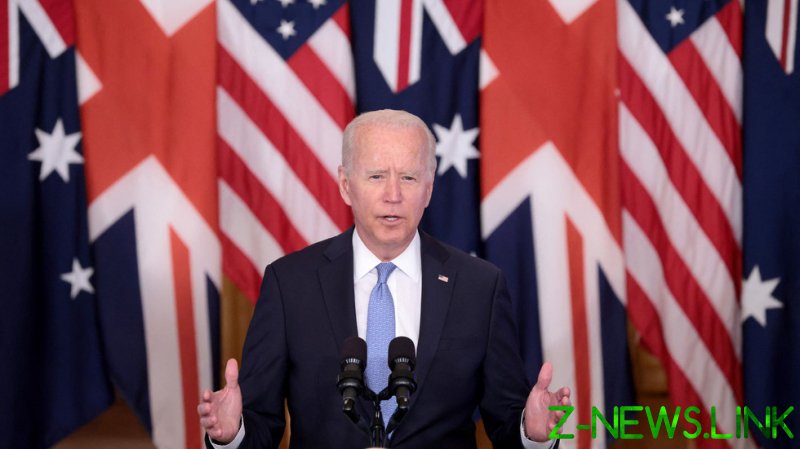 Antiwar reports: “President Biden and the leaders of Australia and the UK announced a new military agreement on Wednesday aimed at countering China. The pact, known as AUKUS, will focus on the sharing of sensitive military technologies, and the first initiative will focus on getting Australia nuclear-powered submarines.”

US officials speaking to CNN described the effort to share nuclear propulsion with another country as an “exceedingly rare step” due to the sensitivity of the technology. “This technology is extremely sensitive. This is, frankly, an exception to our policy in many respects,” one unnamed official said.

This deal will replace a planned $90 billion program to obtain twelve submarines designed by France, an obnoxious expenditure either way when a quarter of Australians are struggling to make ends meet during a pandemic that is four times more likely to kill Australians who are struggling financially. This is just the latest in Canberra’s continually expanding policy of feeding vast fortunes into Washington’s standoff with Beijing at the expense of its own people.

If readers are curious why Australia would simultaneously subvert its own economic interests by turning against its primary trading partner and its own security interests by feeding into dangerous and unnecessary provocations, I will refer them once again to the jarringly honest explanation by American political analyst John Mearsheimer at a debate hosted by the Australian think tank Center for Independent Studies in 2019. Mearsheimer told his audience that the US is going to do everything it can to halt China’s rise and prevent it from becoming the regional hegemon in the East, and that Australia should align with the US in that battle or else it would face the wrath of Washington.

“The question that’s on the table is what should Australia’s foreign policy be in light of the rise of China,” Mearsheimer said. “I’ll tell you what I would suggest if I were an Australian.”

Mearsheimer claimed that China is going to continue to grow economically and will convert this economic power into military power to dominate Asia “the way the US dominates the Western Hemisphere”, and explained why he thinks the US and its allies have every ability to prevent that from happening.

“Now the question is what does this all mean for Australia?” Mearsheimer said. “Well, you’re in a quandary for sure. Everybody knows what the quandary is. And by the way you’re not the only country in East Asia that’s in this quandary. You trade a lot with China, and that trade is very important for your prosperity, no question about that. Security-wise you really want to go with us. It makes just a lot more sense, right? And you understand that security is more important than prosperity, because if you don’t survive, you’re not gonna prosper.”

“You’re either with us or against us,” he continued. “And if you’re trading extensively with China, and you’re friendly with China, you’re undermining the United States in this security competition. You’re feeding the beast, from our perspective. And that is not going to make us happy. And when we are not happy you do not want to underestimate how nasty we can be. Just ask Fidel Castro.”

Nervous laughter from the Australian think tank audience punctuated Mearsheimer’s more incendiary observations. The CIA is known to have made numerous attempts to assassinate Castro.

This new move happens as Northern Territory Chief Minister Michael Gunner announces his government’s policy for Covid-19 restrictions once the territory’s population is 80 percent vaccinated which will include “lockouts” during outbreaks wherein people will only be allowed to work and move freely in society if they verify that they are vaccinated using check-in measures which Gunner literally calls a “freedom pass”.

“I’ll say it again and again. If you want your life to continue close to normal, get your jab,” Gunner said. “For vaccinated people, the check-in app will basically be your freedom pass. For people who make the choice to not get vaccinated, no vax means no freedom pass. We’re working with other governments now to get this technology ready.”

This is in alignment with what we’ve been told to expect as the rest of Australia prepares to roll out the use of vaccine passports.

And we continue to see other authoritarian escalations in Australia which have nothing to do with Covid as well. Authorities have been proposing new legal provisions which will allow Australian visas to be cancelled and citizenship revoked in entirely secret proceedings based on information provided by secretive government agencies. The horrifying Identify and Disrupt bill which allows Australian police to hack people’s devices, collect, delete and alter their information and log onto their social media was passed through Parliament at jaw-dropping speed last month. Neither of these escalations are Covid-related.

People who just started paying attention to Australian authoritarianism during Covid often get the impression that it’s entirely about the virus, but as we discussed previously the actual fundamental problem is that Australia is the only so-called democracy without any kind of statute or bill of rights to protect the citizenry from these kinds of abuses. This is why Australia is looked upon as so freakish by the rest of the western world right now: because, in this sense, it is. People call it a “free country”, but there has never been any reason to do so.

Covid has certainly played a major role in the exacerbation of Australian authoritarianism, but it’s a problem that was well underway long before the outbreak. Back in 2019 the CIVICUS Monitor had already downgraded Australia from an “open” country to one where civil space has “narrowed”, citing new laws to expand government surveillance, prosecution of whistleblowers, and raids on media organizations.

This slide into military brinkmanship and authoritarian dystopia shows no signs of stopping. The abuses of the powerful will continue to grow more egregious until the people open their eyes to what’s going on and begin taking action to steer us away from the existential dangers we are hurtling toward on multiple fronts. If there is any good news to be had here, it’s that if such a miracle ever occurs it will then be possible to immediately course correct and start building a healthy society together.