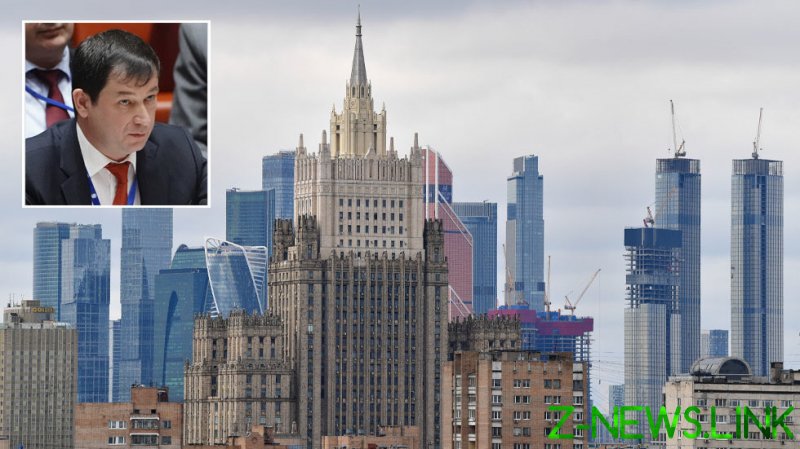 Taking questions from reporters on Thursday, Dmitry Polyanskiy, Russia’s First Deputy Permanent Representative at the United Nations, said that he was concerned about worsening diplomatic relations with Western states, but that Moscow was ready to respond to escalations in kind.

Citing a popular Russian proverb, the envoy claimed that the state of affairs was spiraling further than previously thought possible. “We thought that we had reached the bottom,” Polyanskiy said, “but then somebody knocked from below. And that really is the situation – we thought we were at the lowest point but it seems that our Western colleagues and partners have a lot of other instruments in their toolbox to try to expose Russia [and its purported] malign behavior, its role as an enemy of humanity, as a rogue state or whatever.”

Two weeks ago, Washington announced it would expel ten diplomats as part of its response to its claims that Moscow interfered in the 2020 American presidential elections and was behind the colossal SolarWinds cyber-espionage case. The Kremlin has denied both sets of allegations, and declared the same number of US envoys as persona non grata. Other countries have followed suit, with the Czech Republic barring 18 Russians from the country over disputed suggestions Moscow’s special services were behind a 2014 explosion at an ammunition depot. Poland, Bulgaria and the Baltic states have since ordered similar expulsions in a show of support.

Polyanskiy said this amounted to a “strange month” for diplomacy, and that he had been “surprised by the actions of some of the US’ henchmen in Europe” who had made the moves “to show their loyalty to their patron.”

In the case of the Czech Republic, he said, “the country itself cannot understand what has happened… there is no proof, there are no facts.” Prague is now consumed by a debate over the events of the 2014 blast, with the row dragging in the country’s president, who questioned whether there was a sufficient basis to blame it on Russian spies. A group of senators are now reportedly considering bringing a constitutional case against him for “high treason” over the comments.

In response, Moscow ordered 20 Czech diplomats to leave the capital, two more than Prague had targeted. The Central European nation said that the response was “stronger than expected” and called on other Western states to follow suit and send diplomats home. Polyanskiy, however, said that the numbers involved in the tit-for-tat moves were not relevant, only “attitude and the intention.” With their approach, he claimed, “the Czech Republic and some other countries clearly showed to us that they have no intention to develop bilateral relations with Russia on a goodwill basis.”

“Again, it takes two to tango and if the Czech Republic wants to diminish our relations to zero we will follow suit,” he added.

At a press conference earlier this month, President Vladimir Putin warned that Russian responses to potential threats would not necessarily be proportionate. “We don’t want to burn bridges,” he said. “But, if someone sees our good intentions as indifference or weakness, and they want to burn the bridges, or even blow up the bridges, they should remember this: Russia’s response will be asymmetric, swift, and tough.”

The Czech Republic has said that if its diplomats are not returned to Moscow by the end of May, it could order as many as 22 Russian envoys and 48 support staff to leave the country, bringing the staffing levels of the two missions into parity.

Polyanskiy pointed out on Thursday that Russian personnel numbers were higher because its embassies do not employ foreign citizens locally. He said that these staff would potentially be included in any reciprocal cuts. “We’ll see how we will tackle parity and how many people will be left from the Czech Embassy and who will clean their floors after all the supporting staff have left.”