Home / WORLD / By cracking down on Covid-19 protesters at home, the West has lost all credibility in preaching about ‘human rights’ to Russia

By cracking down on Covid-19 protesters at home, the West has lost all credibility in preaching about ‘human rights’ to Russia 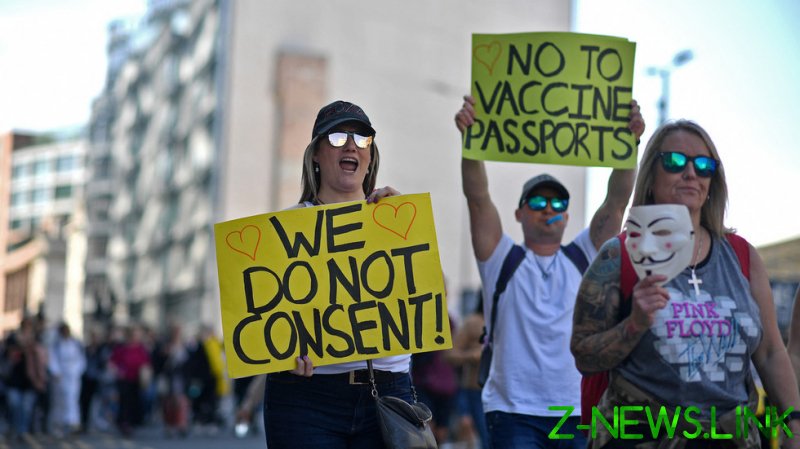 Moscow’s diplomatic spokeswoman, Maria Zakharova, argued that the divide embodied the West’s inconsistent passions for human rights. In January, Vilnius accused the Kremlin of “Stalinism” in its response to unauthorised rallies, banned under pandemic rules. This, Zakharova said, was in sharp contrast to how Lithuanian police deployed tear gas against Covid-19 demonstrators in the capital last week, with the government insisting “democracy is not anarchy”.

Zakharova’s diagnosis is that the West’s coverage of protests in its own backyard is remarkably different to its reporting of Russian demonstrations. When civil unrest occurs in the West, there are strict lines drawn between legitimate peaceful protests and illegal or violent gatherings. There is not an assumption of virtue for those holding signs and chanting against the government, as made clear by the media’s utter derision for anti-lockdown protesters or “populist” protesters on the political Right. In the US, even those protesters who didn’t enter the Congress on January 6 have been labelled “domestic terrorists”.

Demonstrations in Russia and other states with whom there are unfriendly relations are reported on in a widely different manner. The Western political-media class tends to imagine every protest in Russia as a tool for regime change.

When protesters were allowed to march across Red Square in 2012, it was not celebrated in the Western media as another step towards a more open society. It was interpreted as the “Putin regime” being on its last legs. Rallies against the Russian government are always virtuous, in this worldview, as they are supposedly fighting evil, and the use of violence against the police is deemed legitimate, and at times even encouraged. The political-media class never distinguishes between legal and illegal protests when they happen in Moscow, and any arrest of protesters is therefore consistently condemned as being anti-democratic.

The corruption of human security

Towards the end of the Cold War, ‘human security’ became a central focus in the West’s foreign policy. While security has historically focused on state security, as in the sovereignty and defence of states, the concept of human security refers to the wellbeing and resilience of people and communities. That concept is undoubtedly appealing as a way to introduce benign values into the cold realm of international politics, although it can easily descend into imperialism, as it entails diminishing the sovereignty of other states to ‘protect’ the people who live there.

President Ronald Reagan’s crusade for freedom demonstrated that liberal internationalism came with two legacies: Western values and imperialism. Reagan argued that “the democracies … like the communists, should adopt a policy of expansionism”. When the spread of democracy is linked directly to US leadership and hegemony, the previously benign values become another civilising mission.

The politicisation of human security results in its corruption. By portraying liberal protests in Russia as a tool for revolution and regime change, the liberals lose their political legitimacy due to their inability to act within the confines of the political system and their cooperation with foreign powers. Similarly, the necessity to make excuses for human rights violations in the West enables a corruption of the core values to fester.

Consequently, while, in the early 1990s, much of the world looked towards Western values as admirable and something to emulate, today the so-called liberal democratic values are commonly perceived as decadent and merely a thin veil for imperialism.

What role should human rights have in international affairs?

If human rights have been corrupted by linking them to Western supremacy, then the restoration of human rights requires decoupling them from power competition. In the past, this was not a controversial argument.

The first agreement on pan-European security and cooperation during the Cold War was achieved with the Helsinki Accords in 1975. Human rights were introduced for the first time within a common framework, with the first sentence specifying that it was based on “sovereign equality” – that is, all states should enjoy the same sovereignty. The Accords laid the foundation for a common Europe based on shared values, and contributed to the end of the Cold War. In 1990, the ‘Charter of Paris for a New Europe’ was agreed, reiterating the principle of sovereign equality in a Europe without dividing lines. In 1994, the Accords were transformed into an actual inclusive pan-European security institution based on common values and sovereign equality.

The path towards an inclusive European security architecture was then abandoned, as the West argued in favour of organising security within “inter-democratic security institutions” – that is, NATO and the EU. The crux of the argument was that democracy and human rights were a central component, and excluding Russia would make these institutions more capable of organising security.

After the US invasion of Iraq, there were growing calls to establish an ‘Alliance of Democracies’ to elevate legitimacy for US foreign policy rather than relying solely on international law in accordance with the UN. This idea was re-conceptualised as a ‘Concert of Democracies’ that would enable liberal states under US leadership to exempt themselves from international law due to the representation of Russia and China at the UN Security Council. During the US presidential elections in 2008, John McCain called for dividing the world in two with the establishment of a ‘League of Democracies’.

The current attempt to replace international law with the so-called “rules-based international system” is yet another effort to use democracy and human rights as instruments to create one set of rules for states under US leadership and another for the rest. The international system should supposedly consist of equal states, yet some states are clearly more equal than others.

Currently, President Joe Biden is vigorously working to mobilise the “democratic world” under its leadership to confront what he sees as the authoritarian axis led by China and Russia. This suggests that all countries must artificially be divided into the binary categories of democracy versus authoritarianism.

The end of human rights in international affairs

Washington’s crusade to lead the world’s democracies against authoritarian states depicts the world as black and white, thus the grey must be eviscerated. Protests in Western capitals are therefore, in this view, just a messy part of living in a democracy, while protests in Moscow are supposedly evidence of the illegitimacy of the government and therefore indications of collapse.

The failure to decouple protests and human rights from power politics is resulting in the end of human rights as a topic for international affairs. The West rejects common standards, with Moscow’s effort to discuss the human rights violations of the West immediately dismissed as “whataboutism” or a “false moral equivalence”.

Meanwhile, Moscow has no reason to accept lectures on human rights from the West when they come without an understanding of sovereignty. The diplomatic tough talk falls on even deafer ears, it seems, when its messengers say one thing and do another back home.