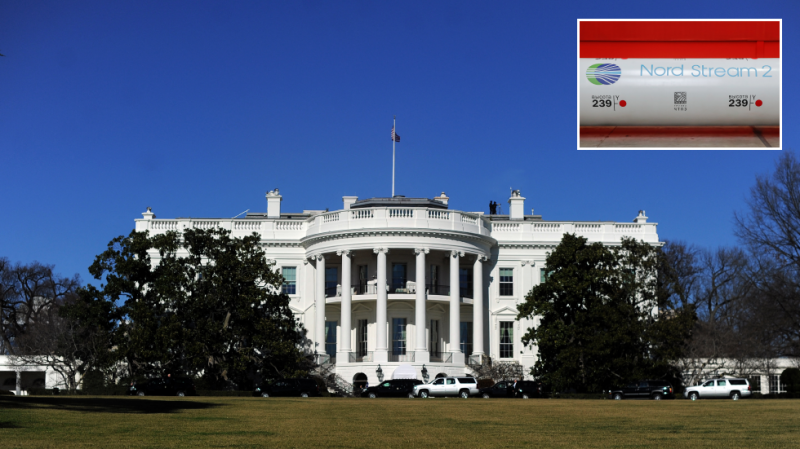 Clothed in the usual unifying language of upholding common values and confronting Russia, the pact was published last week to great fanfare and harsh criticism at the same time. The US agreed to give its “permission” for the gas pipeline, in exchange for concessions from Germany. Berlin has committed to a one-off payment of $175 million to fund Ukraine’s transition to greener energy, and another $70 million to fund bilateral projects with Kiev.

In addition, Germany promised it would oppose Russia using energy as a “weapon” against neighboring nations and ensure that Moscow respects Ukraine’s “right” to make money from overground gas transit. Kiev has repeatedly claimed it faces being cut off from revenue once energy starts flowing through Nord Stream 2, rather than solely through the Soviet-built network of pipelines.

Irrespective of the language of unity, the agreement was largely about Washington saving face by exerting pressure. Nord Stream 2 is a project initiated by Germany to enhance its energy security and make its industries more competitive, by procuring cheaper and more reliable energy directly from Russia. The US attempt to coerce its NATO ally to buy more expensive American LNG, shipped across the Atlantic, or to keep taking gas from Ukrainian pipelines has ended in failure.

President Joe Biden and US Secretary of State Antony Blinken have repeatedly said that they are only ending their opposition to the pipeline because all efforts to block it have been exhausted, and now that it is nearing completion, the sanctions merely sour relations with Germany.

The US is not a participant in Nord Stream 2 and its role has been limited to blackmail, which is the appropriate term for setting conditions for ending its efforts to sabotage and sanction Germany’s energy security. The concessions were not, however, significant, and primarily served the purpose of covering up the US defeat and trying to save face.

The language in the agreement demonstrates that anti-Moscow rhetoric is the glue that keeps the partnership alive and bridges divergent interests. The language also demonstrates why the Western-centric world order was never acceptable for Moscow as it demotes the country to a political bogeyman, on the fringes of Europe. Economic connectivity with Russia is sought in the hope that the West obtains influence over Russia, yet avoided if it means Moscow gains influence in the West.

The continued reference to Ukraine’s “right” to remain a transit state reveals the usual imperial impulses clothed in the language of values and benign intentions. Ukraine supposedly has a divine right to have Russian gas pass through the its territory so Kiev can collect billions of dollars annually in transit fees. Without including Moscow in the discussions, the US and Germany agreed that Kiev’s lucrative role as a transit state should be extended for an additional 10 years after 2024, and Russia should be punished if it “misbehaves” by failing to obey.

For the past seven years, Ukraine has worked to cut all social and economic connections with Russia, which has ranged from cancelling common industries and trade, ending direct flights, and banning Russian-language cultural products. NATO states have to a great extent interpreted this favorably as Ukraine makes the right “civilizational choice.” Indeed, the purpose of the EU’s Association Agreement and the coup in 2014 was to sever Kiev from Moscow.

Disunity in the multipolar era

Nord Stream 2 encapsulates why American-led unity weakens under multipolarity. The West found a common purpose in the bipolar era when there was a need to retreat under US protection and continued in the unipolar era as the EU worked towards negotiating an equal partnership with the US for the West’s collective hegemony. Moscow was the principal adversary in both eras, which cemented the foundation for common interests, and “values” were expressed accordingly.

In the multipolar era, the interests of the West are defined increasingly differently. The US shifts its focus to the rivalry in Asia and has less interest and resources for Europe. Yet, while Washington has less to offer, it expects full political and economic loyalty from Europeans by joining a new Cold War against China and foregoing an independent foreign policy. In contrast, Western Europe sees less threat and fewer competing interests with far-away China and can even pick up some market share lost in the US-China Cold War. Furthermore, with American attention shifting to the East, those on the European continent must be prepared to stand up for their own national interests.

In the absence of common interests, Washington is becoming more reliant on threats of economic coercion against its allies, although these threats failed to sway Germany from pursuing its national interests with Nord Stream 2. The dispute has now been resolved with a formal agreement. However, in the past, cooperation was based on shared interests expressed as ideological unity or common values. This time, in the absence of common interests, a formal agreement was necessary to outline the conditions for the US to end its sabotage of a Berlin-backed gas pipeline. The agreement does not signal trust, and neither should it, as Germany is well aware that Ukraine’s gas transit days are coming to an end.

As the frontlines of the new Cold War move to Asia, the supposed frontier states against Russia lose their significance and become an obstacle for rational policy. The US must prioritize Asia, while Germany must look after its interests in its own backyard. The German-American agreement was reached in spite of fierce opposition from Poland and the Baltic States, while Ukraine reasonably considers itself betrayed as it is no longer a top strategic priority.

Russia looks to the East

Russia too is looking for partners in the East as the West fragments and becomes less reliable. The West’s attempts to convert Ukraine into an anti-Russian bulwark made Russia reduce its reliance on Ukraine by constructing Nord Stream 1, Turk Stream, and Nord Stream 2. Now that the European Union increasingly becomes an unreliable and politically fragmented partner, Russia is diversifying its economic connectivity by looking to the East.

Increasingly, Moscow stands in contrast to a stagnant, ideological and belligerent West by seeking dynamic, pragmatic and accommodating relations in East. Nord Stream 2, for those reasons, will therefore likely be the last gas pipeline Russia builds towards Europe.