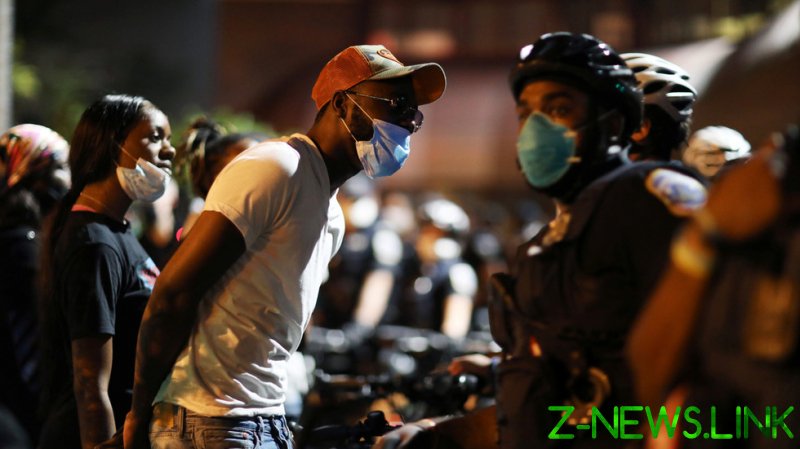 More than 100 people congregated outside of the DC Metro Police Department’s 7th district station on Wednesday night following the police shooting of Deon Kay, 18, who later died of his injuries. Videos that circulated on social media captured the tense atmosphere outside the police station, including a brief scuffle with officers.

In a statement issued in the wake of the shooting, the DC police said that they responded to a call “to investigate a man with a gun,” finding two suspects who fled on foot. Officers pursued the two men, after which Kay is said to have “brandished a firearm,” and was shot one time in response, ultimately killing him. The second suspect was not apprehended.

Citing a law passed in June which mandates the release of police body cam footage within five days of an officer-involved shooting, protesters have demanded the MPD publish the video immediately.

While the demonstration at the 7th district station remained largely peaceful before disbanding – barring a brief pushing match near the beginning of the event – a small group of activists have traveled to the home of DC Mayor Muriel Bowser to continue the action, according to journalist Ford Fischer, who livestreamed from the scene of the protest. Police were already stationed at the mayor’s residence by the time protesters arrived.

Fischer also spoke with a local elected official, Paul Trantham, who said the police bodycam footage would be released sometime on Thursday, adding that it showed that the officers involved in Kay’s shooting had “acted appropriately.”