Home / sports / Bundesliga: Borussia D without Yarmolenko won the Derby, a goal is not scored in a empty net

Bundesliga: Borussia D without Yarmolenko won the Derby, a goal is not scored in a empty net 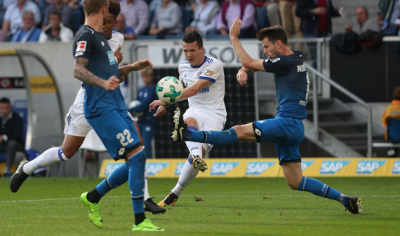 Completed the main program of the sixth round of the championship of Germany on football.

Borussia Dortmund have shipped six goals against the team from Gladbach. Andriy Yarmolenko for the triumphant victory of their teammates watched from the bench. Coach “Bumble bee” by Peter Barefoot was resting Ukrainian front of the match of the group stage of the Champions League against real Madrid.

Yevhen Konoplyanka is not saved Schalke in the away match against Hoffenheim. Ukrainian was the best in his team – in one of those moments when the score was 0:1 ex-midfielder of “Dnepr” has finished the ball into the unprotected goal, but hit the crossbar.

Bayern, leading 2-0 in the home match with “Wolfsburg”, sensationally missed the victory. The German Champions are now three points behind “Borussiya” D, and if Hannover tomorrow beat Cologne, Munich will leave the top 3.