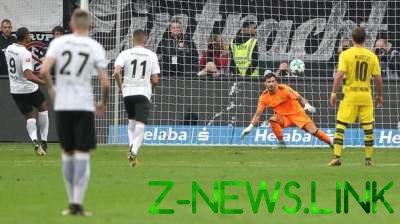 Played the matches of the ninth round of the championship of Germany on football.

Borussia Dortmund very quickly lost the 5 point lead from Bayern. The team of Peter BOS, leading 2:0 in away match with Eintracht, missed a sure three points and are now only at the expense of the best difference of scored/conceded goals ahead of Bayern, which won a modest victory over “Hamburg”.

Through a series of four victories in a row to the leading group joined the Vice-champion of Germany RB Leipzig. For a place in the Champions League zone beat Hoffenheim, Schalke and Hannover.

Midfielder “Borussia” D Andriy Yarmolenko all match against “Eintracht” has spent on the bench. Midfielder “Schalke” Eugene Konoplyanka came on the field in the second half of the home match against “Mainz”, but remembered just missed a killer time – Ukrainian robbed the defender of the guests, but failed to realize the tete-a-tete with the goalkeeper. Midfielder “Bayer” Vladlen Yurchenko traditionally for this season in the application were not included.

See also:  Check the SIM card on the passport: whether it's the Ukrainians

The results of the matches of the ninth round: